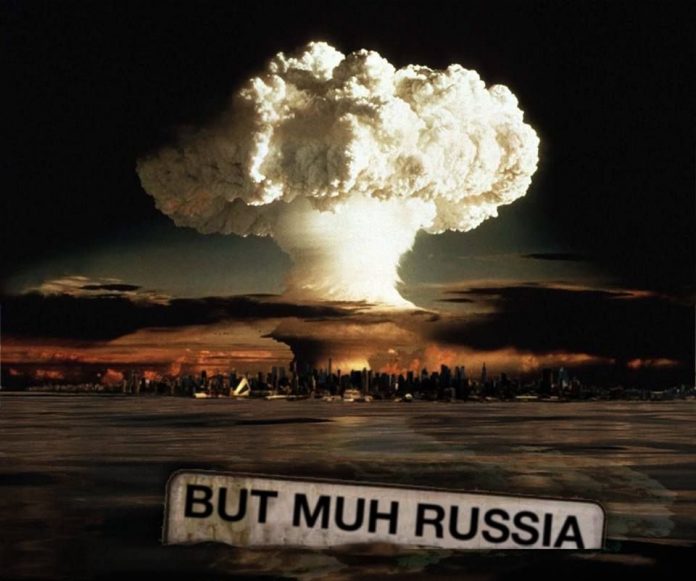 What would be an acceptable risk? One per cent? Ten per cent?  You wouldn’t get into an automobile every day with a 1% chance of crashing. At that rate, you wouldn’t survive a year.

At this moment, two of my favorite authors, Caitlin Johnstone and “the Saker”, are both raising the alarm. The risk, they say, is incalculably high.

I prefer to stay focussed on the chance that there might not be a nuclear war. Maybe we’ll make it through this. What is the point in planning for the worst? We may be surprised to find ourselves still here on this planet next year; and if so, we need to plan and prepare for that happy circumstance.

And after all, the oligarchs and authoritarians in this world are just as much at risk as everyone else. They are playing a game for high stakes. But they know that if full-scale nuclear war breaks out, the game is over and they’ve lost.

The theory of a deep, world-dominating conspiracy is in many ways disturbing. But in one way, it’s comforting. If the Ephraimites or “Sons of Jesse” or the CIA (or whoever “They” are) really are in control, then surely they won’t let the situation get out of hand.

No Command, No Control

But even if there is a central hierarchy; even if Vladimir Putin and Xi Jinping and Kim Jong-Un are just as much “pawns in the game” as Trump and Bolton are; nevertheless, the weapons are in the hands of numerous field commanders. Or at least, if you believe Daniel Ellsberg’s book “The Doomsday Machine”:

With respect to deliberate, authorized U.S. strategic attacks, the system has always been designed to be triggered by a far wider range of events than the public has ever imagined. Moreover, the hand authorized to pull the trigger on U.S. nuclear forces has never been exclusively that of the president, nor even his highest military officials.

As I discovered in my command and control research in the late fifties, President Eisenhower had secretly delegated authority to initiate nuclear attacks to his theater commanders under various circumstances, including the outage of communications with Washington (a daily occurrence in the Pacific) or a presidential incapacitation (which Eisenhower suffered twice). And with his authorization, they had in turn delegated this initiative, under comparable crisis conditions, to subordinate commanders.

To my surprise, after I had alerted the Kennedy White House to this policy and its dangers, President Kennedy continued it (rather than reverse the decision of the “great commander” who had preceded him). So did Presidents Johnson, Nixon, and Carter. So, almost certainly, has every subsequent president to this day, even though in the past several decades there may have been at least nominal “devolution” to some civilian outside Washington. This delegation has been one of our highest national secrets.

The same was true for the Soviet Union, now Russia. Public discussion of American plans for “decapitation” of Soviet command and control led to the institution and maintenance of a “Dead Hand” system of delegation that would assure retaliation to an American attack that destroyed Moscow and other command centers. This, too, has been treated as a state secret: paradoxically, since on both sides the secrecy and denial diminish deterrence of a decapitating attack against it.

An urgent reason for enlightening the world’s public on this reality of the nuclear era is that it is virtually certain that this same secret delegation exists in every nuclear state, including the new ones: Israel, India, Pakistan, and North Korea. How many fingers are on Pakistani nuclear buttons? Probably not even the president of Pakistan knows reliably. Meanwhile, frequent leaked reports in the American press throughout 2016 and 2017 of U.S. contingency plans and exercises aimed in crucial part at decapitating North Korean leadership and command structure have, in my opinion, very probably had the effect in that country of creating a Soviet-like Dead Hand system for assuring retaliation to such an attack.

And did I mention that two of my favorite authors are in panic mode? Let me finish this article by quoting from them. Caitlin Johnstone:

Well I got news for you, snowflakes: if we all get nuked, there ain’t gonna be no midterms.

Please stop this shit, America. If the US war machine goes after Iran or Russia it will likely mean a world war against multiple nuclear-armed countries, which could very easily send our species the way of the dinosaurs should a nuke get deployed in the fog of war. We don’t have time to focus on Stormy fucking Daniels.

Those most fiendishly devoted to the service of the empire would rather take that risk than see the US lose its dominant role on the global stage; for them there is no difference between the end of their empire and the end of their lives. From their point of view they are fighting for their lives, and they are willing to take all-or-nothing gambles with the lives of every terrestrial organism in order to win.

We are staring down the barrel of world war and possible extinction. This should deeply impact the hearts and minds of Trump’s opponents and his supporters. Stop arguing about Stormy fucking Daniels and spread awareness about things that really matter.

What happened to the West I was born in?!

Frankly, I am awed, amazed and even embarrassed.  I was born in Switzerland, lived most of my life there, I also visited most of Europe, and I lived in the USA for over 20 years.  Yet in my worst nightmares I could not have imagined the West sinking as low as it does now.  I mean, yes, I know about the false flags, the corruption, the colonial wars, the NATO lies, the abject subservience of East Europeans, etc.  I wrote about all that many times.  But imperfect as they were, and that is putting it mildly, I remember Helmut Schmidt, Maggie Thatcher, Reagan, Mitterrand, even Chirac!  And I remember what the Canard Enchaîné used to be, or even the BBC.  During the Cold War the West was hardly a knight in white shining armor, but still – rule of law did matter, as did at least some degree of critical thinking.

I am now deeply embarrassed for the West.  And very, very afraid.

All I see today is a submissive herd lead by true, bona fide, psychopaths (in a clinical sense of the word)

And that is not the worst thing.

The worst thing is the deafening silence, the way everybody just looks away, pretends like “ain’t my business” or, worse, actually takes all this grotesque spectacle seriously.  What the fuck is wrong with you people?!  Have you all been turned into zombies?!  WAKE UP!!!!!!!

Let me carefully measure my words here and tell you the blunt truth.

Since the Neocon coup against Trump the West is now on exactly the same course as Nazi Germany was in, roughly, the mid 1930s.

Oh sure, the ideology is different, the designated scapegoat also.  But the mindset is *exactly* the same.

Same causes produce the same effects.  But this time around, there are weapons on both sides which make the Dresden Holocaust looks like a minor spark….

So I ask this simple question: do you really want to go to war against a fully united nuclear Russia?

You think that this is hyperbole?

Today nobody seems to be aware that we are about to go to war, possibly a thermonuclear war, where casualties will be counted in the hundreds of millions.

All because of what?

Because the people of the West have accepted, or don’t even know, that they are ruled by an ugly gang of ignorant, arrogant psychopaths.

OK, so maybe I’m not really so calm about all this, either.