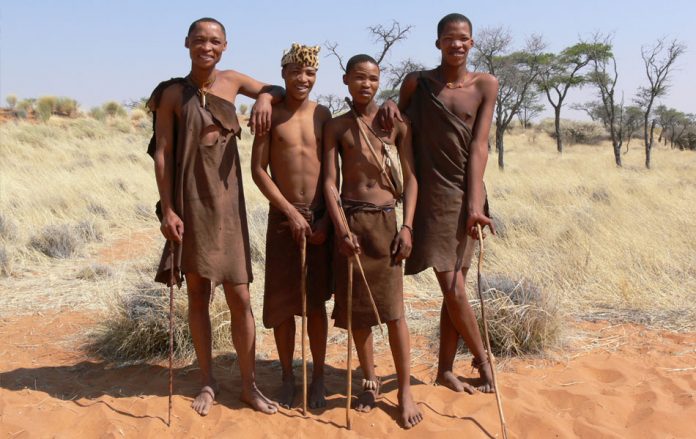 We begin our story in the Paleolithic era, long before the invention of agriculture or writing. For an understanding of human social organization at that time, we must look to the sciences of anthropology, archaeology and genetics. Elsewhere, we argue that the militarization of human civilization may have taken place as a result of a confrontation between prosperous farming cultures of the Fertile Crescent, and invading nomadic horsemen from Northern Europe and / or the Russian Steppes. The invading force may have been numerically insignificant, but was able to establish elite dominance in many situations, and left an unmistakable cultural, linguistic and genetic legacy.

Our analysis does not shrink from the reality that the ruling class consists predominantly of white (“Caucasian”) males. History is steeped not only in patriarchy, hierarchy and war, but also in racism. We believe we can trace the origins of white racist dominance deep into prehistory, and show that its causes are deeply rooted in the evolutionary development of the human genetic diversity during the Paleolithic era.

In contrast to modern civilizations, currently existing indigenous nomadic hunter-gatherer societies are far more egalitarian among the males, although patriarchal. Leadership roles do exist, and tend to be taken up by senior males; but the highly desired characteristics of such a leader include generosity, a calm and non-threatening demeanor with an absence of any anger or other dominance display, and a solicitous openness to everyone’s opinion.

The egalitarianism of these societies also extended to the sharing of food, especially large kills by the best hunters. For the most part, peace also prevails in the realm of family structure and formation, in accordance with the importance of stable families with both male and female parental investment in childrearing. However, within each family, the male is often strongly dominant over females and children.   Indeed, women are largely regarded by men as possessions, to be obtained by trading or arrangement — but not by theft or aggression against other members of the band.

In his book “Hierarchy in the Forest: the Evolution of Egalitarian Behavior” (1999), Christopher Boehm explains that this phenomenon of “egalitarianism” (actually, a fraternal egalitarianism among patriarchs) does not occur automatically or passively, but rather requires an ongoing dynamic process. The outcome of this process is a “reverse dominance hierarchy” in which the male members of a band act as a coalition to exercise dominance over any individual who threatens to overturn the egalitarian order.

The “reverse dominance hierarchy” is also supported by cultural and religious traditions, and are highly internalized in the worldview of each band member. Thus, the surface appearance is that of placid contentment with the social structure. Everyone must live in a state of submission to the existing social order — a submission that could be either a matter of cheerful satisfaction, or sullen resentment. Beneath the surface, Boehm shows that maintenance of the status quo requires continuous monitoring through a multilevel process, that begins with gossip about any behaviors that might be seen as threatening or unfair, and extending when necessary to verbal warnings, ridicule, shunning, expulsion from the group, or capital punishment by the collective. In this way, dominant characteristics can be either actively suppressed, or perhaps channeled into appropriate outlets such as hunting or territorial struggles against outsiders.

To illustrate the mechanisms of enforcement of the reverse dominance hierarchy, Boehm refers to tales of the !Kung people of the Kalahari Desert. Boehm writes:

The !Kung approach to curbing upstartism is assertively preemptive, even though to a large extent their moralistic aggression is cloaked in humor. Lee (1979:244-246) provides vivid details in the words of an informant:

Say that a man has been hunting. He must not come home and announce like a braggart, “I have killed a big one in the bush!” He must first sit down in silence until I or someone else comes up to his fire and asks, “What did you see today?” He replies quietly, Ah, I’m no good for hunting. I saw nothing at all … maybe just a tiny one.” Then I smile to myself because I now know he has killed something big.

A proud hunter’s heavy use of denial and euphemism demonstrates the degree to which the group is able to intimidate its more prominent achievers. And even after his show of modesty, other band members preemptively take pains to put down the hunter. When they go to carry in the kill they express their “disappointment” boisterously.

You mean to say you have dragged us all the way out here to make us cart home your pile of bones? Oh, if I had known it was this thin I wouldn’t have come. People, to think I gave up a nice day in the shade for this. At home we may be hungry but at least we have nice cool water to drink.

The actual feelings of the critics, who simultaneously are joking and deadly serious, is revealed in the words of a culture member:

When a young man kills much meat, he comes to think of himself as a chief or a big man, and he thinks of the rest of us as his servants or inferiors. We can’t accept this. We refuse one who boasts, for someday his pride will make him kill somebody. So we always speak of his meat as worthless. In this way we cool his heart and make him gentle.

However, from time to time, far more extreme measures were the last resort to preserve the rights of the tribesmen against an upstart.

Although Boehm’s theory of hunter-gatherer culture is derived from surviving modern examples, it is widely believed that the entire human race was living in similar cultural conditions during the Paleolithic era. Therefore this condition is of considerable interest, both in terms of understanding its evolutionary development, and also in terms of understanding the causes of its ultimate collapse.

Boehm argues that rudimentary coalition behavior (beta males or females collaborating to restrain an alpha male) is occasionally seen in chimpanzees and gorillas, but that high risk of injury to the lower status actors makes this a rare and costly strategy. He conjectures that as early humans became more skilled with hunting tools and especially projectiles, coalition members could use this capability of action-at-a-distance to reduce their risk in challenging dominant alpha behavior. Bingham (1999) also argues that weapon use is sufficient to explain the rising importance of coalition behavior in early humans, and further argues that this was a necessary precondition to the development of language, based on a situation that would make it both desirable and safe to communicate accurate information in depth to coalition partners.

While agreeing that the development of effective weapons was an important aspect, Chapais (2008) focuses on the evolution of the pair-bonded breeding system from earlier primate pre-conditions, and the role of the practice for creating further evolutionary conditions for cooperation. He argues that while living in small communities similar to chimps, early homo must have been mostly polygamous. But, as humans developed more skills with hand tools as hunting weapons, the costs of defending a large harem of females from the other males, or groups of males, must have become greater and greater. Eventually, Chapais suggests, a practice of monogamy emerged as an equitable alternative to continual strife.

Chapais observes that once early homo tentatively started to practice pair-bonding, a variety of consequences emerged to promote further survival advantages for social monogamy. Once it was possible for paternal relations can be recognized, of course there could be benefits of male parental investment in childrearing. Just as important, the exchange of women between tribes would have created familial social bonds between men in the tribes, which would have been based on cooperative rather than competitive interests.

Of course these benefits of pair-bonding arrangements translated into selection pressure benefiting the children of mothers who were at least socially monogamous, since their children would be provided with known kinship links. Also, there was some selection pressure in favor of males who invested in paternal care of offspring. However, on the male side, any such pressures were counterbalanced at least to some extent by the reproductive advantage of males clever, attractive, deceitful, or powerful enough to circumvent the monogamy convention.