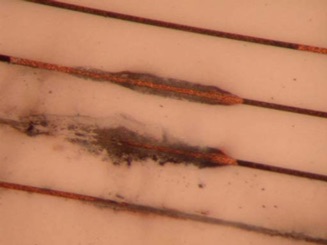 The introduction to “The Secret of the Three Bullets” (subtitled: “A New Generation of Micro-Nuclear Weapons is on the Battle Field”), by Maurizio Torrealta and Emilio Del Giudice, states that “it is just a novel… told as though it were a figment of the imagination”, and that “it is up to the reader to determine whether we are fantasizing or simply recounting what really happened.” In a world full of dogmatic certainty, this humility is refreshing. It is in this same spirit of respect for the reader, that we offer this summary of their work. Hopefully there will be no objections to the “spoilers” below, since Torrealta is a journalist who reported the same “terrible but true” stories for Rai News 24, the state-owned 24-hour Italian news TV channel; and Del Giudice (sadly, recently deceased) was a physicist who also published his findings in two brief publications: a letter, “First Steps Toward an Understanding of Cold Nuclear Fusion” (1989, with T. Bressani and G. Preparata); and a conference presentation, “Coherent Nuclear Reactions In Condensed Matter” (2005, with A. DeNinno, A. Frattolillo and Martin Fleischmann).

So the cat’s out of the bag, so to speak, as the authors have been doing their best to promote this material as factual since many years ago; and furthermore it has had the benefit of presentation on Italian official media, as well as the scientific press. This book itself appeared first in Italian in 2010, and has only recently made its way into English, published by TrineDay in Walterville, Oregon.

The book describes an experiment done at Italy’s ENEA, their national lab for nuclear & energy research. In 1999, ENEA received a grant of over 1 billion lire, to carry out a meticulous study to determine whether there was any truth to the rumors of cold fusion reactions in palladium substrates. After making a preliminary report of successful results, there was initially a great excitement within ENEA, but then a stony silence: the reports could not be released or published, and funding was abruptly canceled. However, eerily, other French and Italian government agencies came to the lab, reviewed the results, and made offers of further funding — only to later rescind or re-direct those offers.

The results of this same investigation were apparently reported in Del Giudice’s scientific paper with Fleischmann et al, which was presented to the 12th International Conference on Emerging Nuclear Energy Systems (ICENES 2005) in Brussels, Belgium: that is, a rather academically disreputable gathering of cold fusion aficionados who were largely unable to get their papers into peer reviewed journals. Their paper laments the fact that cold fusion experiments had been plagued by poor and irreproducible results, to the point where most scientists doubted the reality of the effects.  The authors argue that experimental reliability is crucially dependent on achieving sufficiently high loading of deuterium in the palladium substrate. To facilitate this, they created a thin-film, serpentine palladium electrode that could sustain large electric fields, driving an influx of deuterium ions into a critical region. In this electrode, they could sustain high rates of reaction – at least for a short time, until the electrode destroyed itself by melting. They dryly note that for “civilian applications”, the electrode “must be robust enough to dissipate the expected energy density”. (The image at the top of this post shows the damaged palladium electrode.)

When the required density is achieved, Del Giudice and Fleischmann explain, electrons oscillating “in tune with a coherent e.m. field “ create “coherence domains”, which are “permanent lumps of negative charge able to catalyze nuclear fusion in a way akin to the muon catalyzed fusion.” Regular readers of this website will note that this is exactly the same mechanism described at greater length in my post entitled “Haroche’s Cockroach”. “The Secret of the Three Bullets” strongly hints that Giuliano Preparata was the true inventor of this theory, as it was described in abstract mathematical formalisms in Bressani, Del Giudice & Preparata’s letter that appeared in Il Nuovo Cimento of May 1989. Fleischmann states that he also was well aware of theoretical justifications for the experimental project of Pons & Fleischmann, carried out in the late 1980’s. Their famous press conference was on March 23, 1989, while Il Nuovo Cimento received the letter on April 26, barely a month later. That was some quick thinking! However, this clear & straightforward theory has since been largely lost and almost forgotten in a cacophony of alternate explanations for cold fusion.

Del Giudice speculates that cold fusion research was delegitimized following Pons & Fleischmann’s press conference because of a coalition of military and hot fusion workers who were provoked by the sudden announcement. He suggests an analogy to “Tutankhamen’s Curse”: that is, just as the Earl of Carnarvon died of pneumonia a few months after having funded the discovery of Tutankhamen’s tomb, so also both Preparata and Fleischmann were stricken by an unusual cancer of the intestines, and journalist-advocate Eugene Mallove was murdered under suspicious circumstances. Of course this could be a coincidence; Del Giudice notes that he himself is a counter-example: “when I was twenty, I had my fortune told by a gypsy, who predicted that I would have an exceptionally long life.”

Accordingly, Del Giudice says he will speak in riddles: he asks, what if you use uranium as the substrate for the reaction, instead of palladium? The book goes on to note that Edward Teller, ‘father of the H-bomb’, asked this same question at a conference in October 1989. And in an interview, Martin Fleischmann agrees that this is a very good question. Fleischmann says that “anyone and anywhere”, could try it, and that such a technology is the only way he can imagine, to explain the highly explosive and high-temperature effects of ‘depleted uranium’ anti-tank weapons.  However, Fleischmann denies that he has ever tried to create cold fusion in a uranium substrate: contrary to rumors indicating that just such an experiment was responsible for a notorious explosion in Fleischmann’s lab.

It is in this context, that Torrealta and his colleagues at Rai News sought to interpret information regarding several strange incidents in war theaters. These include an explosion in Khiam, Lebanon on July 25, 2006, which created a radioactive crater with traces of enriched uranium residue; a 5-kiloton nuclear explosion on Feb. 27, 1991, near Basra in Iraq, reported by Jim Brown, a US Army veteran of the first Gulf War, and verified by seismic confirmation, which was accompanied by large releases of ‘depleted uranium’ from other weapons; and mysterious bombs used in Gaza, causing small explosions with grizzly and horrifying effects.

Confronted with this information, Del Giudice tells Torrealta that uranium can be charged with deuterium to a greater loading factor than palladium. According to research done by Percy Williams Bridgman in the 1930’s, when uranium is compressed at very high pressure (such as in a projectile impact), its lattice can be fragmented, inducing a great release of energy involving ‘paranuclear phenomena’. Del Giudice speculates that if a uranium projectile is charged with deuterium and then fired at a target, the impact will cause deuterium fusion to occur, releasing gamma radiation that could then trigger a fission chain reaction in the uranium. In support of this hypothesis, Del Giudice notes that after the ENEA cold fusion study, the palladium electrodes were shown to contain about 10% nickel atoms, which could only be the result of palladium fission which occurred during the fusion experiment.

While it is believed that a conventional nuclear bomb might use 7-8 kg of highly enriched uranium to create a 20 kiloton explosion, Del Giudice believes that this cold-fusion trigger technology could create a much smaller 2-ton (TNT equivalent) explosion using only 100 grams of natural uranium, or a larger explosion if enriched uranium (U235) is added. Making an analogy to a three-card shell game played by a con man, Del Giudice argues:

I’m not inventing anything… you have the evidence that the three-card game was done with three different bullets: the official depleted uranium ones that exist almost exclusively in books; the dirty uranium ones with traces of materials produced by fission – that may have occurred in a nuclear reactor or at the moment they exploded, and that anyway serve to increase radioactivity, which will poison the area where they’re used and cover up the third type of bullet – the uranium one charged with deuterium, which acts as a primer for a nuclear bomb the size of a bullet. … Well, this game of the three bullets is now happening in several countries…. And so now, with ambiguity crafted to perfection, the true prohibition is broken, the one that humanity decided nobody could break: the return of nuclear weapons.

In conclusion, the authors mention a 2005 patent for projectiles made of uranium or several other metals, or hydrides of those metals, whose energy release may be increased by adding a pressure containment structure. However, the patent claims that any excess energy release is the result of chemical reactions. They speculate that this projectile patent may be referring to the same technology as discussed in another patent filed by cold fusion researcher Yoshiaki Arata, describing cold fusion in a zirconium matrix.

Viewed in the context of my earlier post “Haroche’s Cockroach”, this book by Torrealta & Del Giudice represents a collaborating argument from both theoretical & practical perspectives. While the suggestion that cold fusion technology was in use as early as 1991 is fascinating, I would add that the theoretical and experimental studies carried out by Serge Haroche and his colleagues and peers (including Steven Jones and Joseph Jacobson) probably led to the development of a more sophisticated pure fusion weapons technology during the 1990’s, necessary for covert use in false-flag operations such as the WTC in 2001. I would no longer assume that these weapons leave anything other than a very short-lived radioactive signature, caused by the release of gamma radiation during the explosion.