In a stinging indictment of Vatican efforts to address sexual abuse by priests, an Irishwoman who was abused as a child resigned Wednesday from a panel that is advising Pope Francis on how to respond to the scandal that has tarnished the Roman Catholic Church for decades.

Marie Collins said she quit the Pontifical Commission for the Protection of Minors because she was frustrated by a lack of cooperation with the panel by some members of the Roman Curia, or Vatican administration.

“As a survivor I have watched events unfold with dismay,” she said in a statement to the National Catholic Reporter. “The reluctance of some in the Vatican Curia to implement recommendations or cooperate with the work of a commission when the purpose is to improve the safety of children and vulnerable adults around the world is unacceptable.”

The commission said that the pope had accepted Collins’ resignation “with deep appreciation for her work on behalf of the victims/survivors of clergy abuse.” It also noted in a statement that she had accepted an invitation from the head of the panel, Cardinal Sean P. O'Malley of Boston, to work with it in an educational capacity.

“We will certainly listen carefully to all that Marie wishes to share with us about her concerns,” O'Malley said, adding, “As the commission gathers for the plenary meeting next month we will have an opportunity to discuss these matters.”

Collins was the only survivor of clergy abuse serving as an active member of the commission after Peter Saunders, a British member who was an outspoken critic of the panel’s work, was placed on a leave of absence a year ago. Her departure raises fresh questions about the Vatican’s commitment to ensuring that children are protected from predator priests.

Among the reasons Collins cited for her resignation was the failure to set up a tribunal to hold accountable negligent bishops, who long covered up accusations of abuse in dioceses around the world. Even though Francis signed off on the idea in 2015, she said, it was found to have unspecified “legal” difficulties and never implemented.

Collins also complained that although the commission had developed “safeguarding guidelines” to help bishops’ conferences draw up their own polices to protect children, those guidelines had not yet been disseminated.

“The last straw,” she said, was when she learned that a Vatican department was refusing to respond to correspondence from abuse victims.

“I find it impossible to listen to public statements about the deep concern in the church for the care of those whose lives have been blighted by abuse, yet to watch privately as a congregation in the Vatican refuses to even acknowledge their letters!” she said in the statement. “It is a reflection of how this whole abuse crisis in the church has been handled: with fine words in public and contrary actions behind closed doors.”

Collins expressed disappointment that the pontiff had in some cases reduced sanctions for members of the clergy who were convicted of abuse. Although she noted that she had not had an opportunity to sit down with Francis during her three years on the commission, she said she believes “the pope does at heart understand the horror of abuse and the need for those who would hurt minors to be stopped.”
http://www.latimes.com/world/la-fg-vatican-priest-abuse-20170301-story.html​
R

300 predator priests in just one state, the tip of an iceberg. Behavioral over-compensation (such as predation) is what happens when one attempts to un-naturally repress otherwise natural inclinations, whether those inclinations are exercised responsibly or not. Of course the Church has other motives for setting strict morals, knowing that large portions of its flock cannot always hold to. It profits, literally and figuratively, by exacting Shame on them. Rather than supporting contraceptives and other health practices, it cynically uses the abortion issue as a political wedge issue, and enables it to leverage the Low Church (Protestant) Evangelicals to their side.


The Pennsylvania Supreme Court has ordered the release of a redacted copy of a grand jury report on sexual abuse by clergy members that includes a list of more than 300 “predator priests.”

The Philadelphia Inquirer reported Friday that the public copy of the report will not include the names of more than 20 current and former clergy members who have fought in court to not be identified in the report.

“There can be no doubt that the subject matter of the report is incendiary, and therefore, the stakes for individuals reproached therein are substantially heightened,” Chief Justice Thomas Saylor wrote in the court’s 31-page order.

The report documents decades of allegations of abuse and cover-ups in six of the state’s eight Catholic dioceses, according to the news site. ...
http://thehill.com/blogs/blog-briefing-room/news/399353-pennsylvania-supreme-court-orders-release-of-report-listing​

Of course, Protestants have not been immune from such abuses, but here again the level of repression seems to correlate with the level of clergy abuses and lay abuses in the respective wider communities. This includes higher levels of divorce, domestic abuse, etc..

For a history of the Church's waffling on contraception:


This month marks the 50th anniversary of the landmark "Humanae Vitae," Pope Paul VI's strict prohibition against artificial contraception, issued in the aftermath of the development of the birth control pill. At the time, the decision shocked many Catholic priests and laypeople. Conservative Catholics, however, praised the pope for what they saw as a confirmation of traditional teachings.

And although Catholic moral theology has consistently condemned contraception, it has not always been the church battleground that it is today. ...
https://www.businessinsider.com/the-catholic-church-wasnt-always-so-against-contraception-2018-7​
R

Vatican intrigue has heated up over the homosexual and pedophile priest issue(s). Archbishop Carlo Maria Viganò has raised allegations against Pope Francis, which the below excerpted article clearly exposes as being Fake News. So then, what is all this latest tempest about, and being raised by such a 'traditional' Sabine scion of the Church? Viganò is continuing to conflate homosexuality with pedophilia, the traditional dodge of the Church, where the Church also encouraged Catholic families to steer their effeminate sons, BTW.

To me, nobody seems to benefit from this, even Viganò and his Traditionalists. As such, can all this be seen in the light of what I have discussed as the Church having quietly advanced that a 'new revelation' is coming ... from Heaven, just like the Book of Revelation says? And which I have dubbed 'Space Jesus'. The Jesuits manning their LUCIFER telescope on top of Mt. Graham in Arizona stating that they watch the aliens zooming about in preparation for this 'alien' messiah to 'arrive'. If this is the case, then the existing order must necessarily be subsumed to the new, just as Judaism was made subservient to the Roman order about 2,000 years ago. Hence, this contrived controversy of Viganò's and Francis's, atop the real suffering of the abused children, provides the cynical pretext for the coming of the new order: "Suffer the children unto me" -- says the new Savior (of the second [sic] Second Coming).


...
But if that’s the case, why didn’t the pope point all this out? That same reluctance to deal honestly with the issue and hide behind obfuscatory remarks is what rightly enraged Catholics after Francis’ bizarre response to questions last week over McCarrick. Tornielli did a good job of pointing out the obvious discrepancies, which Francis could have easily pointed out as well. Instead, the pontiff appeared to hide behind the kind of public dodge one expects from a politician rather than an honest response becoming a man of God, especially one following in the footsteps of Peter.

And that’s the problem with simply dismissing Viganò as a sore loser. Sore losers might have their axes to grind and may manipulate information to make themselves look good, but it doesn’t mean they’re entirely wrong, either. The cold, hard fact remains that the church has sheltered serial abusers for decades, and that McCarrick was allowed to reach the highest levels within the church despite being suspected of abuse for a long period of time. Palace intrigue might explain Viganò’s motives, but it doesn’t explain away the abuse, the systemic cover-ups, and especially the reluctance of the Catholic Church’s leadership to address it openly and forthrightly more than two decades into its exposure. That problem starts at the top, with Pope Francis, and cascades down through the entire organization.

If the Vatican wants to restore its credibility, it had better change its tactics. They can start by unveiling their records of abuse reporting within the church here in the US … rather than wait for 48 more grand juries to finish the job.
https://hotair.com/archives/2018/08/28/la-stampa-vigano-not-exactly-truthful-mccarrick-francis-know/​

Staff member
In the first of a three-part series, Whitney Webb is establishing far-reaching connections to the Jeffrey Epstein case, including National Crime Syndicate figures Samuel Bronfman, Lewis Rosensteil and Meyer Lansky, and Trump's lawyer Roy Cohn. She shows that Cohn and Rosensteil ran sexual blackmail operations similar to Epstein. These figures were all Jewish, but Cardinal Spellman makes a surprise appearance.


The question that necessarily arises from revelations regarding Cohn’s activities in Suite 233 is who else was Cohn “protecting” and servicing with underage prostitutes? One of them could very well have been one of Cohn’s close friends and clients, Cardinal Francis Spellman of the Archdiocese of New York, who was said to have been present at some of these parties Cohn hosted at the Plaza Hotel. ​
​
Spellman, one of the most powerful figures in the Catholic Church in North America who was sometimes referred to as “America’s Pope” was accused of not only condoning pedophilia in the Catholic church and ordaining known pedophiles including Cardinal Theodore “Uncle Teddy” McCarrick, but also engaging in it himself to such an extent that many New York area priests widely referred to him as “Mary.” Furthermore, J. Edgar Hoover was said to have a file detailing the Cardinal’s sex life, suggesting Spellman’s involvement in the ring and pedophile protection racket in which Cohn and Hoover were personally involved.​
​ 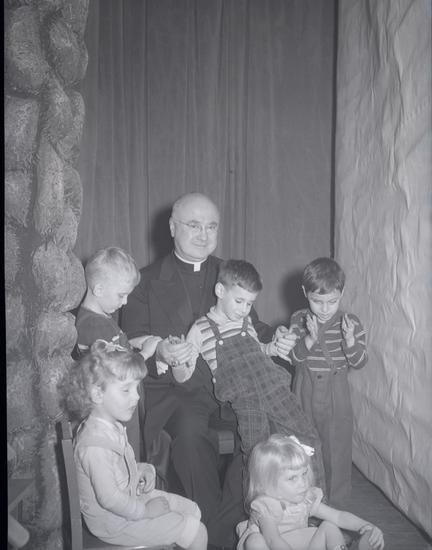 Spellman with children (Photo: Museum of the City of New York.)
R

Wow, I did not know that Dick Morris was a cousin of Roy Cohn's. But it all makes sense.

Also, we must reiterate that Cardinal Spellman is perhaps most responsible for agitating for the Vietnam War, hence the term "Spelly's War". This war became the foil for the American counter-culture to push against.
You must log in or register to reply here.
Share:
Facebook Twitter Reddit Pinterest Tumblr WhatsApp Email Link
Top