The Tate Murders; False flag?; to kill the hippy?; who was Sharons father? 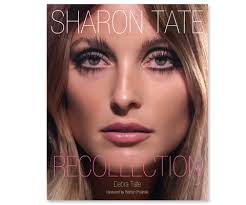 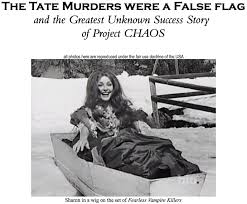 Check out this suppressed photo of the famous three: 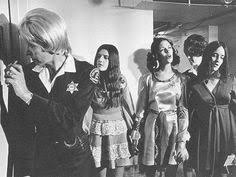 Tell me that doesn't look like a scene from a play. What actors' trunk did they pull those dresses from? They don't look like witches, hippies, or anything else. They look like a CIA director's idea of “mod young girls.” Van Houten looks like she was dressed from the wardrobe of Star Trek. Even the police woman's wig looks like it came from an actors' trunk. Does that look like a real police woman's uniform? Look at the waist! Do you think police women had coats with cinched waists in the 1960's? Her waist not only looks like it is about 24”, the coat is cut to match it. Show me one real police woman who was ever dressed in a coat like that and I will give you a commendation. That isn't city issue. That is Hollywood issue. But can you tell me why that photo above has been suppressed? More continuity problems: 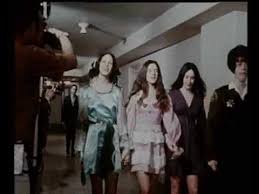 False flag - Wikipedia, the free encyclopedia
en.wikipedia.org/wiki/False_flag
False flag (or black flag) describes covert operations designed to deceive in such a way that the operations appear as though they are being carried out by entities ...