The article claims that this salute did not originate with the Romans as the the Italian Fascists and the Nazis claimed. Unfortunately, it does not state where it originated but we are left to assume that the American use of it was not the first. The beginning of the article states that the motivation to use it in American public schools was to attempt to heal the divides from the Civil War and to help culturally assimilate the waves of immigrants at the time.

The flag hanging to the left of the (15 starred) American flag looks rather Germanic perhaps, with an X inside a circle - and possibly some eagle heraldry? There is another American flag at the far right that is being saluted.

...
“At a signal from the Principal,” Bellamy wrote, “the pupils, in ordered ranks, hands to the side, face the Flag. Another signal is given; every pupil gives the flag the military salute—right hand lifted, palm downward, to a line with the forehead and close to it. Standing thus, all repeat together, slowly, 'I pledge allegiance to my Flag…'” (The words of the Pledge itself have a long and contentious history of their own, as Amy Crawford wrote for Smithsonian magazine last year.)

The Pledge slowly picked up steam, especially as educators concerned about the gigantic influx of immigrants in the 19th century looked for ways to instill patriotic values and a sense of national, assimilative identity. With their right hands raised, children all over the country recited the Pledge in school and at public events.

Then came fascism, and the rise of a salute used by supporters of a charismatic politician named Adolf Hitler. The dictator seems to have made a Nazi "Heil Hitler" with raised arm the official gesture of his party after witnessing Italian Fascists performing the salute. As Jessie Guy-Ryan reports for Atlas Obscura, both the Italians and the Germans claimed that the salute was based in Roman and medieval Germany history, respectively, though they both had purely modern origins—and Smithsonian.com reporter Rose Eveleth notes that confusion over the fascist salute and a similar salute to the Olympic flag made the 1936 Olympics even more hairy politically.

Now that the one-armed salute smacked more of totalitarianism than of American patriotism, Americans abandoned the gesture that had been a symbol of national unity for 50 years. The 1942 U.S. Flag Code attempted to distance the Pledge of Allegiance from the country's avowed enemies, instructing saluters to put their right hand over their heart while reciting the Pledge, and also included instructions for people to salute the flag with their right hand over their heart while listening to "The Star-Spangled Banner." (Though the song was written back in 1814, it had only been the United States' official anthem since 1931.)
http://www.smithsonianmag.com/smart...-wanted-to-look-like-a-nazi-180960100/?no-ist
​
Last edited: Dec 7, 2018

Richard Stanley said:
Unfortunately, it does not state where it originated
Click to expand...

I remember reading about the Bellamy salute in G. Gordon Liddy's Will when I was in high school. I found it quite surprising.

According to wikipedia, the origin of the modern hand gesture is The Oath of the Horatii by Jacques-Louis David. The salute used by the actual Romans was probably closer to what we use in court when swearing an oath

Which in turn refers to a 2009 book by Martin Winkler entitled "The Nazi Salute: Cinema, History, Ideology"

Winkler traces the salute to more recent artistic depictions of ancient Romans, beginning with Jacques-Louis David’s 1784 painting, The Oath of the Horatii.
Click to expand... 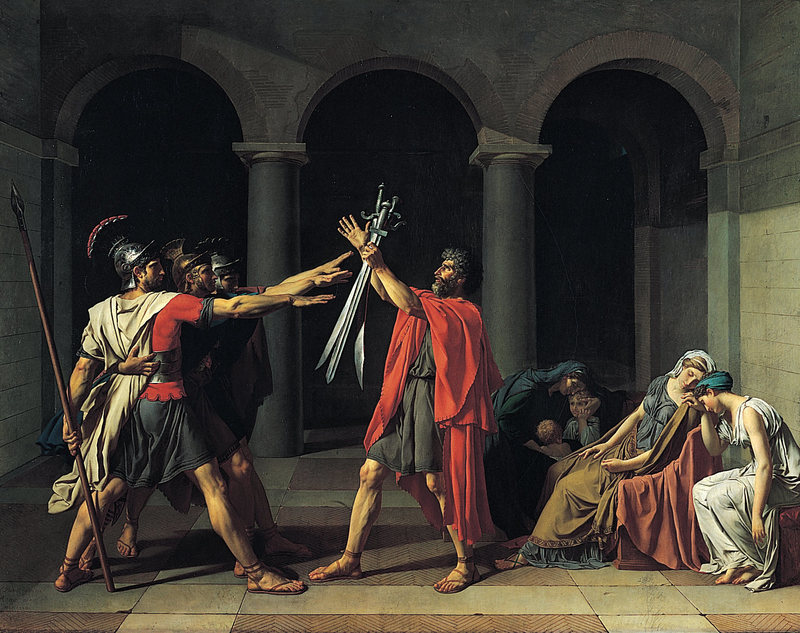