The Flavian Signature - Outside of Jerusalem - Laws of Leadership

I haven't bothered colour-coding the 2nd half but hopefully everyone understands... 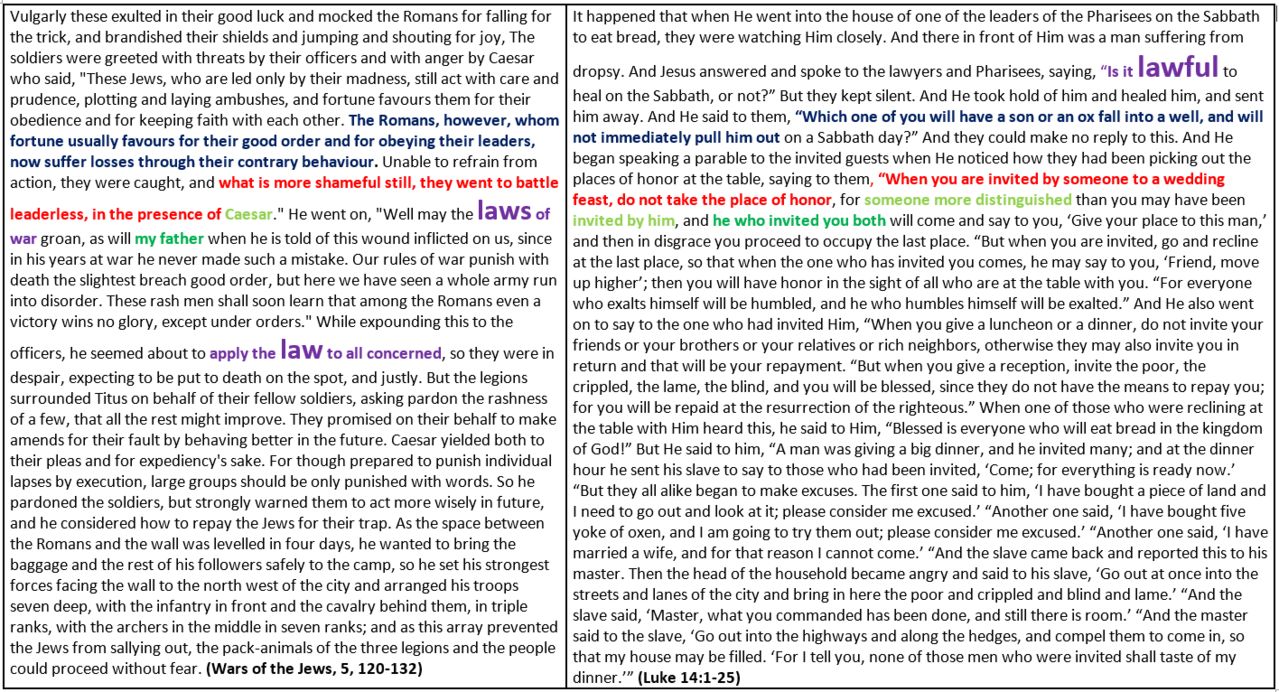 Joe mismatched that; the correct match I posted in another topic of the same name "Narrow Gate...".

At this point I'm just trying to map out what you're doing, and how it fits in with Joe's version. I'm working on a spreadsheet. You're probably right that you've made some improvements, but I'm not trying to make conclusions about that myself yet. Having said that, I really appreciate all your careful attention to this.
G

It was clear when I first read Caesar's Messiah that half of the Flavian Signature was matching - but not the other half - this is what thew me off course originally when I was working on the Caesar's Messiah Proven site. I knew Joe was onto something - and his other chapters are irrefutable and of the highest scholarship; it was as though Joe was giving away many secrets but at the same time obscuring the Flavian Signature, albeit with enough hints for others to build on. Now, I doubt Joe did this deliberately - unless he has orders from above. Fortunately, my brain is left-sided dominant (who needs the right side? ) so what the 99% of the population is struggling with through poor "memorise and repeat" education - and the Romans knew this - the trees amongst the forest and designed vs. coincidental parallels - is second nature to me, hence one of the reasons I've taken up this challenge; the other reason being that I would like citizens to become more alert about governments. I've always been interested in problem solving and also work in this field. However, I will admit that even I have been (temporarily) tricked and deluded when I tried to understand the nature of random - that defeated me - but for people and governments it's not so easy. So everything has to be taken with a pinch of salt - and Joe is not immune to mistakes - since we are all human and only temporary residents of this planet (no heaven unfortunately).

How am I working compared to Joe and the foundation he laid?
*Joe mismatched several parallels, leading to false benchmarks, thereby halting progress on the Flavian Signature and stopping other parallels from naturally fitting in to where they should be.
*Joe matched some parallels out of context with their larger blocks, i.e. partial or oversimplistic parallels. And I think many recently discovered parallels still need building upon - or they are not fully understood.
*The Son of Mary who was a Human Passover Lamb is not the actual parallel, but acts as reference - together with the hyssop being placed at Jesus' death - for the true parallel that occurs later, thereby allowing other parallels to fall into sequence. Now, Masada and the triumph have been added to the typology/dual story.
*Once the valid benchmark parallels are established and the invalid ones discounted, the gaps start to fill in and parallels have begun falling in place at an accelerated rate.

Once I've exhausted the Flavian Signature gaps I will soon start a new topic called The New Flavian Signature that links to all these other topics, establishing the harmonised sequence - perhaps with a table of selected shared names, verbatim, locations and concepts to give an overview.
You must log in or register to reply here.
Share:
Facebook Twitter Reddit Pinterest Tumblr WhatsApp Email Link
Top