The Flavian Signature - Galilee - Fear rather than Death

"Cast out Supporters of the Son of Man" seems to be an invalid parallel, so the "cast out" shared verbatim could be coincidence; the Sermon on the Mount seems to be inserted into the gospels with no Jewish War parallels; the parallels resume shortly afterwards: 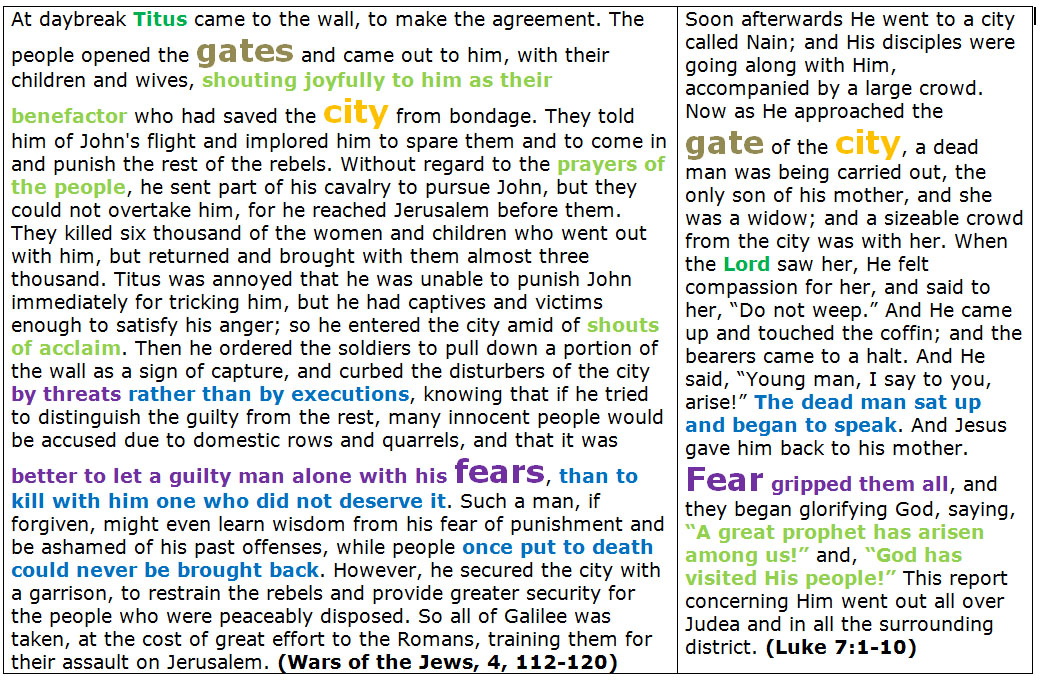 The above replaces CM#8 "Mercy, the "unburied" that are "happy", and the prophet" in the least obvious "entrance" set of parallels.
G

Previous Parallel: Faith of the Centurion

Chronology
At daybreak Titus came to the wall, to make the agreement. The people opened the gates and came out to him, with their children and wives, shouting joyfully to him as their benefactor who had saved the city from bondage. Titus was annoyed that he was unable to catch and punish John who had escaped the night before, but he had captives and victims enough to satisfy his anger. (JW 4.112-120)

Fear rather than death
Location: ? / Nain

Code:
Verbatim: gate, city, fear.
Concept: heal with fear rather than execute with death; shouts of acclaim towards a benefactor or prophet in the context of prayers and God.
Typology/Satire: A dead Jew of a widow was being carried out near the gates of a city taken by Titus. The Lord told her not to cry as the dead man did not deserve to die, so he healed the man – but everyone was gripped with fear instead; The Romans believe in tricking the Jews with fearful threats rather than with executions. However, was this just to lead the Jews into a false sense of security? We encountered the same situation in an earlier parallel: last time the Jews began “glorifying God” in the gospels it was when they were cruelly executed in the Jewish War. So who got tricked here – Titus or the Jews? “the people were peaceably disposed” – that sounds like they were indeed executed to me as before (see the parallel Easier to say "get up and walk" than "your sins are forgiven"). Martyrdom before Islamic extremism when people became brainwashed into doing it willingly? In the gospels, although the man began to speak, he was perhaps already a dead man.