The Flavian Signature - Galilee - Faith of the Centurion

OK, Joe got this parallel wrong and I couldn't find it either - but the Flavian Signature found it since both sides exist in the logical place - in-between "Keep holy the Sabbath by restoring the right hand" and "Fear rather than death"! 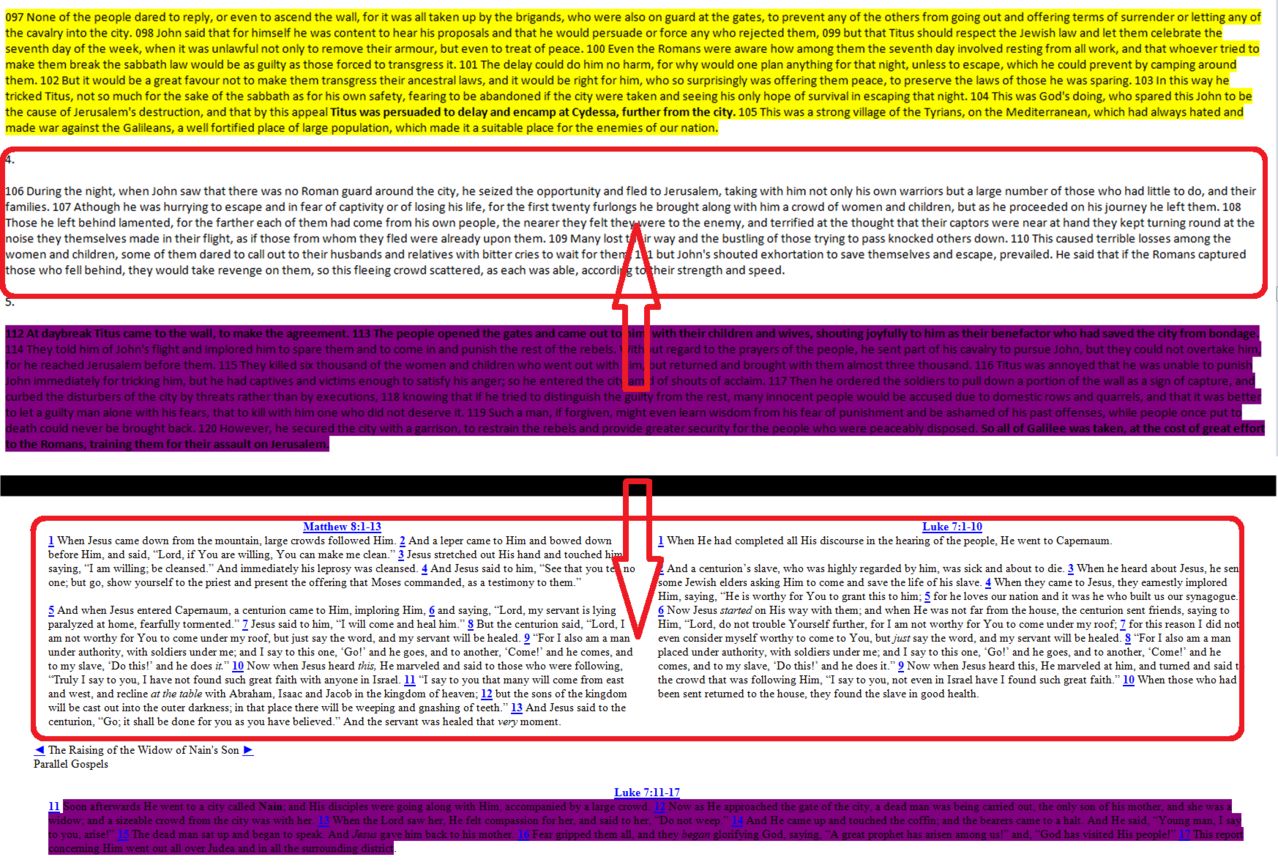 Staff member
Joe's version of this parallel was at JW 4, 6, 366-377. The passage in Josephus compares God to a Roman general, afflicting the Jews with a sickness. I took a stab at color coding analogous concepts to Giles' coding of Luke and Matthew above, but it seems to me that neither parallel is strong enough that it would even be noticed, aside from that we're looking for it to be found in its place in sequence.

366. And now all the rest of the commanders of the Romans deemed this sedition among their enemies to be of great advantage to them, and were very earnest to march to the city, and they urged Vespasian, as their lord and general in all cases, to make haste, and said to him, that “the providence of God is on our side, by setting our enemies at variance against one another; 367that still the change in such cases may be sudden, and the Jews may quickly be at one again, either because they may be tired out with their civil miseries, or repent them of such doings.” 368But Vespasian replied, that they were greatly mistaken in what they thought fit to be done, as those that, upon the theater, love to make a show of their hands, and of their weapons, but do it at their own hazard, without considering, what was for their advantage, and for their security; 369for that if they now go and attack the city immediately, “they shall but occasion their enemies to unite together, and shall convert their force, now it is in its height, against themselves. But if they stay a while, they shall have fewer enemies, because they will be consumed in this sedition: 370that God acts as a general of the Romans better than he can do, and is giving the Jews up to them without any pains of their own, and granting their army a victory without any danger; 371that therefore it is their best way, while their enemies are destroying each other with their own hands, and falling into the greatest of misfortunes, which is that of sedition, to sit still as spectators of the dangers they run into, rather than to fight hand to hand with men that love murdering, and are mad one against another. 372“But if anyone imagines that the glory of victory, when it is gotten without fighting, will be more insipid, let him know this much, that a glorious success, quietly obtained, is more profitable than the dangers of a battle; 373for we ought to esteem these that do what is agreeable to temperance and prudence no less glorious than those that have gained great reputation by their actions in war: that he shall lead on his army with greater force when their enemies are diminished, and his own army refreshed after the continual labors they had undergone. 374However, that this is not a proper time to propose to ourselves the glory of victory; 375for that the Jews are not now employed in making of armor or building of walls, nor indeed in getting together auxiliaries, while the advantage will be on their side who give them such opportunity of delay; but that the Jews are vexed to pieces every day by their civil wars and dissensions, and are under greater miseries than, if they were once taken, could be inflicted on them by us. 376Whether thereforeanyone hath regard to what is for our safety, he ought to suffer these Jews to destroy one another; or whether he hath regard to the greater glory of the action, we ought by no means to meddle with those men, now they are afflicted with a distemper at home; for should we now conquer them, it would be said the conquest was not owing to our bravery, but to their sedition.”

377. And now the commanders joined in their approbation of what Vespasian had said, and it was soon discovered how wise an opinion he had given. And indeed many there were of the Jews that deserted every day, and fled away from the zealots,​
G

The top one looks very strong to me, but it's true: I never found it myself - it just fell in place after the sequence was benchmarked properly. The sequence isn't based on Luke or any particular gospel - it's based on a harmonisation of at least the 3 synoptics; that's when everything began to make more sense and fall in place. And any problems scholars have had with the chronology of Jesus' ministry - the Flavian Signature now helps resolve - so they work together to find the correct sequence of events for both the gospels and Jewish War. That's why I think we need to rethink the Lazarus lunch based on the newly jigged Samaritan/Mount of Olives Escape parallel.
G

Previous Parallel: Tolerance of tyre and sidon over galilee

Continuing with the analysis of the Flavian Signature of their authorship of the Gospels and Josephus, following the Sermon on the Mount, we pick up the story here:

Chronology
John fled to Jerusalem and took with him a large crowd, but they became separated/deserted during the journey. (JW 4.106-111)

Faith of the Centurion
Location: Capernaum / towards Jerusalem from Gischala

Verbatim: not much (fear, save/healed) – rest is conceptual.
Concept: large crowds fleeing on a journey/many coming from east and west; ordered to move back and forth/turning around, bustling and losing their way; good strength and speed/good health; fear of the Romans.
Typology/Satire: John flees Gischala with a large crowd “in fear of captivity” of the Romans, but then he deserts his people who fall behind. A centurion (or Roman with similar power) encounters John’s people and treats them like slaves, ordering them to move back and forth just for the sake of it. In this confusion the Jews keep turning around and changing direction not knowing who to turn to – John or the Romans – so they lose their way coming to a standstill, “paralyzed” and “fearfully tormented” so to speak. They even bump into each other like idiots and knock each other down – the slaves that they are. The centurion is warned about reclining with the leaders of the Jews, as the Romans will be casting them into the outer darkness with weeping and gnashing of teeth – a reference to seizures shortly before death during the later siege and famine of Jerusalem. The Jewish slaves then find faith under the centurion, and with a sudden increase in “strength and speed”, return to their homes in good “health” – “saved”/"healed" by the Romans.