The Flavian Signature - Broken through lack of food and other essentials

This occurs between Easier to say "get up and walk" than "your sins are forgiven" and Daughters of Jairus/Jacimus: 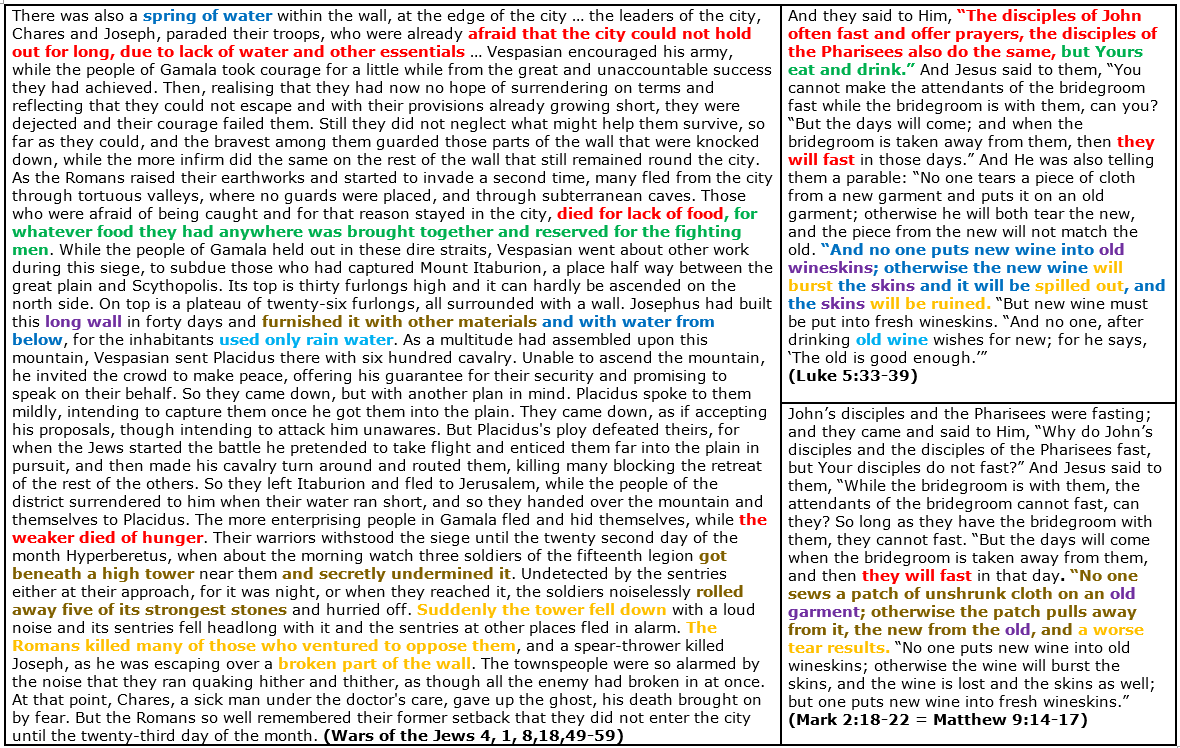 Previous Parallel: Compassion rather than sacrifice for sinners

Moving onto the very next harmonized block of the synoptic gospels and continuing the battle of Gamala on the Jewish War side, we come to this….

Chronology
While the people of Gamala held out in these dire straits, Vespasian went about other work during this siege, to subdue those who had captured Mount Itaburion, a place half way between the great plain and Scythopolis. As a multitude had assembled upon this mountain, Vespasian sent Placidus there with six hundred cavalry. Placidus managed to outsmart the enemy, killing many, but some fled to Jerusalem, and the rest of the mountain and district was surrendered to him.

Broken through lack of food and other essentials
Location: ? / Gamala

Verbatim: fast/hunger (the rest is conceptual)
Concept: new wine is comparable to spring water; old wine is comparable to rain water. Important people eat and drink, whilst others have lack of food. Furnishing/patching. A tear in poor masonry is comparable to a tear in other materials.
Typology: In mixing new liquid with old materials and patching them up (represented typologically by the wall system for both examples) a worse tear results. So the Romans are then able to gain the upper hand in this battle and kill many Jews.
Satire: The Jews will indeed fast – because some died from lack of food in this battle. That’s a basic reading, but there’s probably a bit more to be understood here in terms of Josephus’ role compared to the local inhabitants OR there is more satire here regarding the Jew named Joseph who gets stabbed with a spear, i.e mixing of new blood with old blood? (“the wine will burst it’s skins”) And the "bridegroom" part is a warning that the Jews will fast during the Jewish War akin to what the Babylonians did when they destroyed them (see The Seventy Year Captivity in Jeremiah 25)

Next Parallel: Daughters of Jairus/Jacimus