Sustainability and the Integrity of our Intentions

This is a huge wind turbine, similar to the biggest one shown in this chart, and so it should be rated at about 2500 MW peak power. 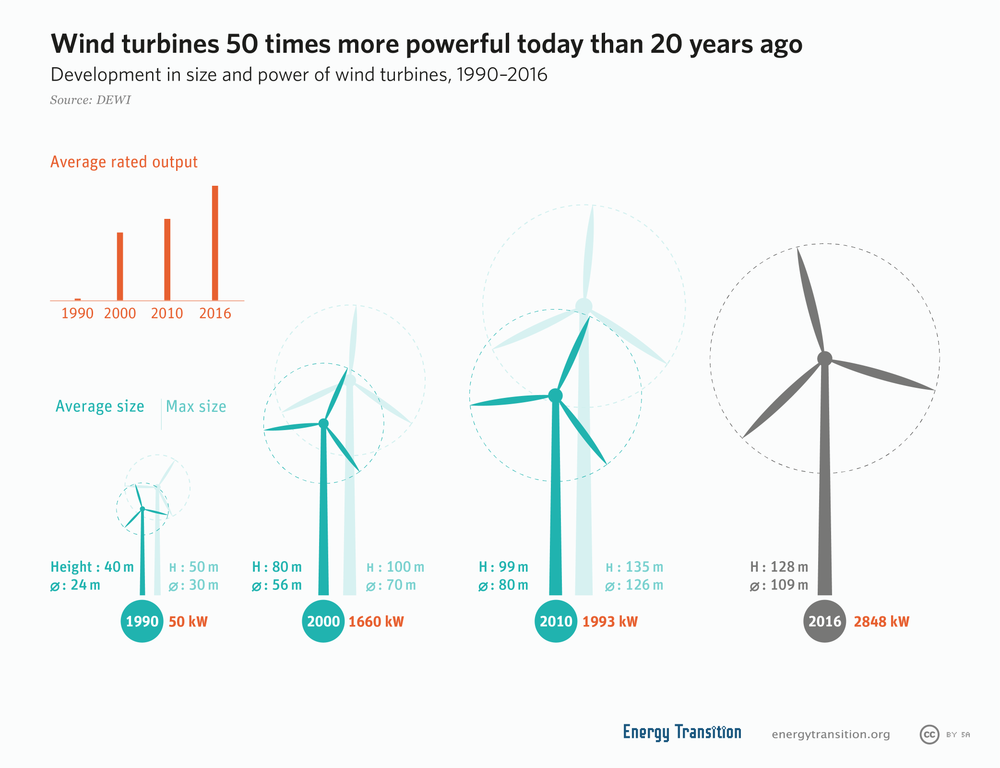 The massive amount of material and energy involved is shown in the film and in the captions:

The unanswered question is, how much fossil fuel has gone into the construction of this turbine? Martenson says:


I see diesel very obviously in the heavy equipment, graders, backhoes and trucks that show up. It’s less obviously in the mining and manufacturing required to even build those pieces of heavy equipment. It’s even less obviously in the roads they drove in on, and the food in the worker’s bellies.​
​
But it’s there.​
​
Here’s how many mining and manufacturing supply chains that exist in the entire world that could build a single piece of heavy equipment using only electricity: Zero.​
And in addition to diesel fuel, of course there's coking coal for steel, and explosives for mining, including petroleum derivatives for advanced composites, and rare earth magnets in the generator.

Martenson points out that this is replaceable energy, not renewable energy. Sooner or later, this turbine is going to wear out. All the materials that go into it will need to be recycled or landfilled, and another turbine will need to be built.

If the fabrication and construction of this wind turbine was done entirely with renewable electricity, what would it cost? In dollars, or in KWH? The computation can't be done, because (as Martenson points out) the necessary supply chains don't exist, and haven't even been designed.

How many Planet Earths would it take, to supply the materials necessary to build enough turbines to supply energy for world civilization? Not to mention, to keep rebuilding them for all eternity?

How long is this machine built to last? Just looking at the rebar in the foundation, Martenson concludes that its lifetime is probably 40 to 80 years. See:


By itself, concrete is a very durable construction material. The magnificent Pantheon in Rome, the world’s largest unreinforced concrete dome, is in excellent condition after nearly 1,900 years. And yet many concrete structures from last century – bridges, highways and buildings – are crumbling. Many concrete structures built this century will be obsolete before its end. ​
​
Given the survival of ancient structures, this may seem curious. The critical difference is the modern use of steel reinforcement, known as rebar, concealed within the concrete. Steel is made mainly of iron, and one of iron’s unalterable properties is that it rusts. This ruins the durability of concrete structures in ways that are difficult to detect and costly to repair.​
How soon will the towers themselves rust out, and how soon will the rotors fail due to airframe fatigue? I doubt that anybody has done this calculation, either.


If we were thinking about all of this clearly, we’d not be pouring wind tower bases using reinforced concrete. Instead, we’d build pads that would be durable for centuries, because presumably we’re investing in wind power for the very, very long haul.​
​
In the end, isn’t there something terribly ironic about making a future-betting ‘investment’ in wind upon a base of reinforced concrete that is, by definition, destined for a short, disposable life?​
​
That alone says much about just how un-serious we really are. And how out of integrity our actions are with the very premise of sustainability.​
Last edited: Sep 11, 2019
E

Staff member
Think I'm laying out the bait-and-switch, eh? I'm just asking questions. I don't know if there are any good answers available. The technology is evolving & improving constantly, so these calculations would be moving targets. A blog post by Gail Tverberg says "published EROEIs for solar PV (and wind) might be called misleading". Tverberg provides this graph showing electricity cost vs. installed wind+solar capacity in various countries. Prices vary by almost a factor of three, depending on the installed alternative energy base. 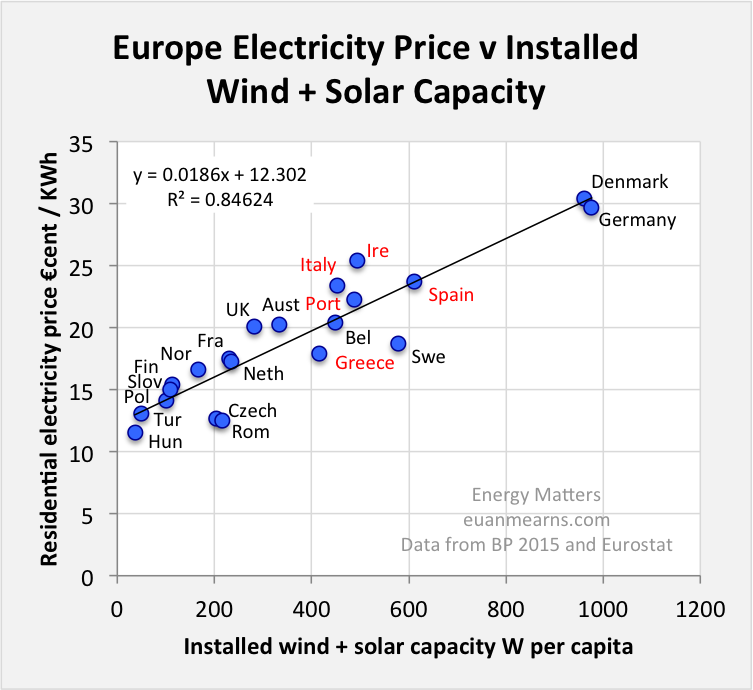