Staff member
This week, we speculated about the effects that alternative media & the Internet might have had on the election.

See this link about James Alefantis, his "pizza" parlor, and John and Tony Podesta:

I generally agree with the discussion of Trump and Hillary as controlled opposition mirrors of each other. Many, such as me, figured that Trump was a stalking horse for Hillary, but maybe it was always intended that the golden boy wins.

If we can use the globalism / nationalist dialectic as a lens, then as an analogical comparison it might be useful to compare Steve Bannon, Trump's new chief advisor (and co-equal to Reince Preibus, the new Chief of Staff) as a modern day Apostle Paul, an "all things to all people" agent provocateur.

Bannon came to advise Trump in the last few months after running Breitbart News, founded as an uber-Zionist right wing media aggregator. But by the time of the presidential campaign, Breitbart News had become a prime site for white Race Nationalists, among other fringe right groups. Breitbart was getting more hits than many MSM outets by far.

Bannon came to this Zionist enterprise as a member of the neo-Roman imperium. He mixed it up with the admirals at the Pentagon, Virginia Tech, Harvard (MBA), Master's Degree in National Security from Georgetown, Priebus say Bannon also attended the London School of Economics, then was a big wig at Goldman Sachs M&A, started his own boutique bank in Hollywood, and was director of science experiment Biosphere II, and produced the movie Titus (Andronicus).

In this Hollywood sphere, he likely earned his 'Jewish friend' Entryism bona fides by taking a major position in the hit TV series Seinfeld. It was during this time that he met Matt Drudge and Breitbart. When Breitbart's heart was mysteriously 'taken out', Bannon took over the reins of Breitbart's media empire.


... By March 14 several top executives and journalists at Breitbart had resigned complaining that "... Breitbart's unabashed embrace of Mr. Trump, particularly at the seeming expense of its own reporter, struck them as a betrayal of its mission."[42] Former employers accused Breitbart executive chairman Stephen Bannon of having "turned a website founded on anti-authoritarian grounds into a de facto propaganda outlet for Mr. Trump."[13]

On August 17, Stephen Bannon stepped down from his role as executive chairman at Breitbart to join the Trump campaign as its new CEO.[43][44] On August 25, Trump's opponent Hillary Clinton criticized him for hiring Bannon as his CEO in her rally in Reno, Nevada. She stated that the site "embraces ideas on the extremist fringe of the conservative right" by reading out the site's headlines and that Trump's decision to hire Bannon "represents a landmark achievement for the alt-right".[45][46]
https://en.wikipedia.org/wiki/Breitbart_News​
Here is the beginning of Breitbart News:


During a stay in Israel, Breitbart conceived of the idea of founding Breitbart News Network, with "the aim of starting a site that would be unapologetically pro-freedom and pro-Israel. We were sick of the anti-Israel bias of the mainstream media and J-Street."[9]


“ One night in Jerusalem, when we were getting ready for dinner, Andrew turned to me and asked if I would de-partner from the 800-person law firm where I was practicing and become business partners with him. He said he needed my help to create a media company. He needed my help to “change the world"... We were blown away by the spirit, tenacity, and resourcefulness of the Israeli people on that trip. Andrew could be quite convincing, not to mention inspiring, and I decided right there and then to “throw away” (my Mom’s phrase) a perfectly good, successful and safe career in order to start a “new media” company with Andrew Breitbart. ”[9]​
The Wikipedia page details a number of big story propaganda scams that Breitbart ran, and in this light it appears to me that the Weiner Affair(s) are part of the same milieu, in addition to Weiner likely being involved with such compromising sexual actions discussed about Podesta et al. (And yes, Republicans are caught up in that all the same. For one, remember Jeff Gannon from Boys Town and Dubya.)

Bannon also started a completely separate and expensive data mining operation to dig dirt on Lefties, and feed the analysis packages to mainstream media reporters. Bannon produced Clinton Cash. So in addition to agitating the redneck goyim with half truths or worse, he can produce slick and sophisticated materials, all things to all people.


Bannon is also executive chairman and co-founder of the Government Accountability Institute, where he helped orchestrate the publication of book Clinton Cash.[5][13] In 2015, Bannon was ranked No. 19 on Mediaite's list of the "25 Most Influential in Political News Media 2015".[23]
https://en.wikipedia.org/wiki/Stephen_Bannon​
It would be interesting if Joe / Collectivist would agree that today's Jews are ironically today's globalists and today's White Nationalists are today's Zealots when compared to Flavian times?

Would Joe / Collectivist agree that today's Christians are truly the good fruit of Imperial Rome's efforts?

How does Joe reconcile these two propositions, if he accepts them, that is?
Last edited: Nov 15, 2016
R

This was the value proposition for Trump:


Right-wing alternative media has exploded over the course of the year as Trump encouraged his supporters to "forget the press, read the Internet." Infowars, Drudge Report and -- above all -- Breitbart.com have seen their readerships skyrocket. Breitbart received a record-breaking 37 million unique visitors in September. In a nod to its influence, its executive chairman Steve Bannon will now serve as Trump's chief strategist.

Shades of conservatism aside, the alt-right are cultural rebels and nationalists whose firmament is the Internet.

If defining them is hard, their political agenda is clearer. Liberalism is the dirtiest word, and its trappings -- feminism, political correctness, multiculturalism, "social justice" -- are to be resisted. The establishment is corrupt and full of political cuckolds, or "cucks," who have failed America through their cowardice.
http://www.cnn.com/2016/11/14/opinions/what-next-alt-right-krasodomski-jones-opinion/?iid=ob_lockedrail_bottomlist​
So not only did Trump cuckhold the nationalists, Bannon cuckholded Breitbart.

Then we continued with the news about Comet Ping Pong & Pizza, aka 'Pizzagate': more at --

Is it legal to even look at these pictures? Pete Townshend was once brought in on pedophilia charges for clicking through on an Internet link. I'd be surprised if those pics were any worse than these. See:

Staff member
This article looks at exit polls and gives solid evidence that Trump stole the election from Hillary by manipulation of vote counting, just as Hillary benefited from vote fraud during the primaries. This election was completely illegitimate from beginning to end.

What Does This Mean and What Do We Do?

First and foremost, it should be made clear that the electoral fraud that has taken place MUST NOT be used as a vehicle for attempting to remove Trump from the presidency or for installing Hillary Clinton. She too benefited from massive electoral fraud in the primaries and is as implicated as anyone else in this criminal endeavor. And despite the weeping and wailing from liberal Democratic Party loyalists – I throw up a little just typing that phrase – Clinton is just as illegitimate as Trump.​

Staff member
The Nov. 25 podcast is now posted. We had plans for a special guest this week, but last-minute computer problems got in the way.

So, we gave a Standing Rock update, a Pizzagate update, and some coverage of this story from Wayne Madsen, who argues that the Clinton's strange matching attire at Hillary's concession speech is symbolic of their revolutionary plans. 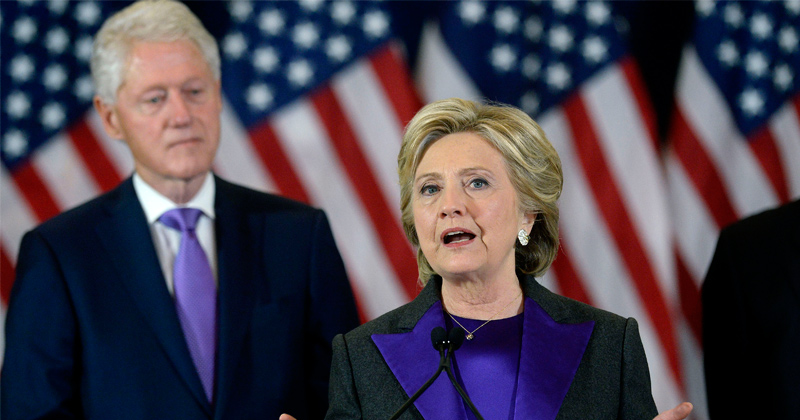 However, I looked at the Madsen link and was interested in reading that and other pages there to see him and Paul Craig Roberts talk as if Trump is an authentic opposition to the opposition. Fortunately both of you have gone to the next level.

Trump has just hired Mitch McConnell's wife as Sec Trans. Ironic here because it was McConnell's support (and promise to make Obama fail at all costs) that prevented spending on infrastructure. And now Trump wants to go Yuuuuge. The swamps of Kentucky will probably get more pork than all California will.

Also linked from Strategic-Culture is a counter "fake news" site with a list of hundreds of "fake news" sites. We didn't make it on the list as adequate propagandists. Is this a complement or an insult?
http://www.propornot.com/p/the-list.html

I've always viewed this website as a work in progress. I would like to finish our Old Testament Series, and have some sort of narrative covering the rest of history down to the present. And a very attractive, state-of-the-art graphical presentation on the front page.

Once those milestones are in place, I feel we'll be in a good position to go looking for Internet traffic. The partnership with Joe has helped to bring some hits, but there's a lot more we could do. Link exchanges, guest editorials on more popular websites, working social media, maybe even some Google ad buys. Once we get serious about popularizing ourselves, it shouldn't be too hard to get onto propornot's list.
R

Just don't burn the flag Jerry. Now you wont even be able to burn the flag anymore. http://postflaviana.org/community/index.php?posts/6986

I forgot to add that it is also interesting to me that we are being pulled into a new dialectic. Namely you're either with 'US' globalists, or with The Putin. Here Trump is being tentatively placed in the Russian camp, as also witnessed by Madsen's and Roberts's comments. All cynical manipulation.
You must log in or register to reply here.
Share:
Facebook Twitter Reddit Pinterest Tumblr WhatsApp Email Link
Top