Staff member
For the cast of characters, see:

If that's not depressing enough, here's a video mash-up of Roger Waters' "It all makes perfect sense".

Don't worry Jerry, the heptopods will save us.

Staff member
I am resurrecting this thread to make a few more points about the (renewed) conflict over the Holy Land, and especially last week's "Fourth Gaza War". Forum member Ruby Gray called my attention to this video by Sky News Australia commentator Rowan Dean, featuring this "one photo which tells all you should know about the Israel-Gaza conflict": 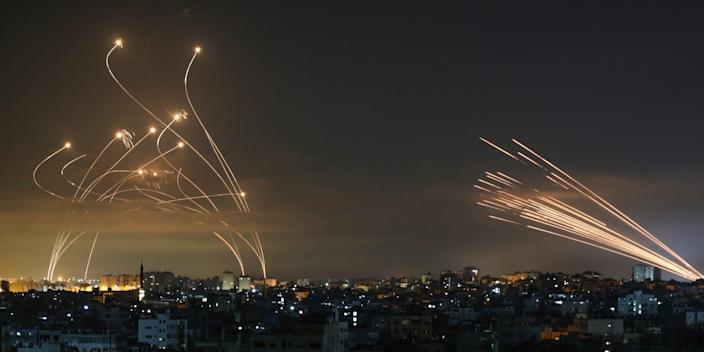 The above photo appears at about 1:00 in the video, and is accompanied by this narration:


... this is what is called the iron dome at work in the skies above Israel. On the right hand side of the photo, you can see the deadly rockets being fired out of gaza in an aggressive and deliberately offensive act of war, designed to kill and maim as many innocent everyday israeli citizens as possible. [...] Now on the left hand side of the photo, looking like something out of star wars or close encounters, you can see the iron dome: a technological miracle that allows Israel to shoot those Iranian and Hamas rockets out of the sky in a purely defensive act designed to save citizens' lives.​
Dean goes on to fulminate about the "insidious rubbish that the Palestinians are the victims" which is being "spouted by fools such as the creepy former leader of Pink Floyd, Roger Waters" (who was, ironically, featured in my above post from 2017).

But of course, this is not "all you should know". Aside from the thousands of years of history summed up in the Nina Paley video above, the current hostilities began with clashes between Palestinians and Jews in the areas of Sheikh Jarrah and the Al-Aqsa mosque, both internationally recognized as Palestinian territories. Jewish security forces escalated the confrontation in those areas, leading to an ultimatum from Hamas demanding that the Israelis withdraw. This ultimatum was ignored, and Hamas commenced rocket attacks against Israel. The Israelis continued the escalation, beginning a campaign of air strikes.

If Rowan Dean was meaning to give an impression that Israel's retaliation was purely defensive in nature, obviously that's ridiculous. In the end, casualties on the Palestinian side have been estimated at 248 dead, 1900 injured, and 72,000 displaced. On the Israeli side, the toll was said to be much lower.

Another video from Sky News, featuring Andrew Bolt, indirectly shows that the Palestinian cause is drawing vast support from around the world. And this includes some very blood-thirsty Arabs who clearly want to drive Israel out into the ocean. (However, this same thing is true on the Israeli side, as Jimmy Dore and Max Blumenthal discuss in "CAUGHT ON VIDEO: Israel Youth's Shocking Bloodthirsty Opinions".) Getting back to Bolt's video -- he makes the point, which is well-taken, that the Palestinians are using Iranian missile technology in this war. As Bloomberg explains:


Until recently, extremist and terrorist groups didn’t have long range rockets. In 2001, when Hamas first began to use projectiles, known as “Qassam” rockets, these had a range of several kilometers. But Iranian assistance, delivered by the Islamic Revolutionary Guard Corps, has been a game-changer. Hamas now regularly targets Tel Aviv, 66km from Gaza, and claims its “Ayyash” missile can reach 250km. ​
​
Israeli officials reckon Hamas now has some 15,000 rockets. Some were smuggled in from Iran but most are Gaza-made, with Iranian knowhow. Hezbollah is thought to have expanded its arsenal from around 15,000 rockets in 2006 to more than 130,000, despite Israeli attempts to interdict the IRGC’s supply line through Syria.​
Bolt claims that liberal journalists and Palestinian supporters in general, are ignorant of this connection with Iran. And there are some easy-to-find instances of this. Such as this editorial by Chris Hedges, which is generally an excellent counterpoint to the pro-Israeli rhetoric from Sky News, but which sees Iran as ultimately playing for an alliance with the Saudis, who are in turn committed to US and Israeli interests. Hedges does not mention Iran's assistance to Hamas, and concludes that the Palestinians are "powerless and friendless, even in the Arab world." Similarly, Michael Lesher, writing in the Off-Guardian, focuses on Israeli crimes, while seeing the Palestinians as armed with little more than firecrackers.

I agree with Bolt, that the alliance between Hamas and Iran is central to understanding the 4th Gaza war. And, at least according to a story in Arab News, the Saudis are now joining Iran, Iraq, the UAE and Turkey in their support for the Palestinians.

Elijah Magnier explains that the Iranian missiles made the conflict far more dangerous for Israelis than before:


Palestinian resistance groups had introduced new long-range missiles and significantly increased firepower with a rhythm of more than 150 rockets fired daily and simultaneously. The Palestinians registered more than 100 buildings hit in Israel, and Gaza introduced a new equation by bombing from the first day Jerusalem and Tel Aviv. This is a fundamental change in the rules of engagement, of bombing gradual stages and avoid bombing Tel Aviv, to which the “Axis of the Resistance” is accustomed. For the first time, new missiles were launched, under the name “Al-Qasim” (named after the Iranian commander Qassem Soleimani responsible for supplying the Palestinians with weapons) which has a warhead of 400 kg and “Ayyash” (named after “Yahya Ayyash ») with a range of 250 kilometres.​
​
Khaled Meshaal, representative of “Hamas” abroad, did not hesitate to say that “the resistance has benefited from Iran, its missiles and its expertise, and the organizations in Gaza have benefited from the smuggling of weapons and military technology.”​
​
[....]​
​
Israel claims it has intercepted 90 per cent of the total 3000 rockets and missiles coming from Gaza against different Israeli cities. This means that at least a few hundred missiles managed to escape from the Israeli interceptor missile network. These rockets force thousands of Israelis into their shelters and prevent everyday life continuing as usual unlike previous wars on Gaza.​
With 90% of missiles intercepted, it would be interesting to know the relative costs of an Iranian missile and its Israeli counterpart. Is this symmetrical or (as I'm guessing) highly asymmetrical in cost? But more importantly, a 10% success rate is enough to create real terror in the Israeli population.

And, after the cease-fire, Magnier says that the Palestinians achieved their goals in the conflict: with hostilities halted, the Palestinians have retained control of Sheikh Jarrah and the Al-Aqsa mosque, and thus did not lose an inch of territory.


The Gaza war that recently broke out was due to the Palestinian militants’ awareness of the Zionist officials’ intention to Judaize Jerusalem and expel all Arab residents from the city. Israel began its campaign in the Sheikh Jarrah neighbourhood in Jerusalem to forcibly displace Arabs from their land and to settle a Zionist population in their place. The Palestinian resistance groups (mainly Hamas and the Islamic Jihad) in Gaza decided to issue an ultimatum to Israel to prevent it from deporting Arabs and Muslims from Jerusalem. Former US President Donald Trump unlawfully offered the city as a gift to his friend, Israeli Prime Minister Benjamin Netanyahu. Hence, Israel’s goal was (and still is) to seize Jerusalem, heading in later years towards the West Bank in subsequent steps.​
​
Israel will not be deterred from its goals but must rather postpone its plans to occupy Jerusalem for another term. Consequently, Gaza’s decision to link the cease-fire agreement – despite the heavy human and material losses – with the protection of the Palestinian inhabitants of Jerusalem is a decision that stems from the will to defend the holy city and the Arab population.​
​
The Arab Palestinian people in Gaza seemed ready to accept the losses they suffered from this battle and future battles, a price considered by the Palestinians worthy for defending what remains of Palestine.​
Last edited: May 22, 2021

Staff member
Regarding ethics of Hamas and their Iranian missiles, Norman Finkelstein's viewpoint also deserves some consideration. Although if the war escalates, bringing the USA, Europe and Australia in on one side, and Iran, Russia and China in the end: we'll all be equally dead, regardless of who is ethically more correct. Which was the point of the Paley video.