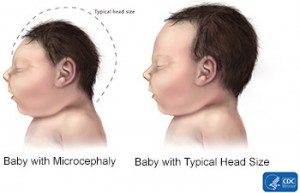 I live only two hours from the epicenter of the Zika outbreak in Brazil where an epidemic of microcephaly is taking place. The situation is not what is being wildly reported. It has little or nothing to do with a mild virus called Zika any more than it has to do with the virus thought responsible for the common cold, though as we shall see scientists have been playing around with genetically modified mosquitoes in Brazil. Dr. Wallace Ransom says, “Only about one in five victims of the Zika virus actually suffers any effects at all.”

The Zika virus is spread to people through aedes aegypti mosquito bites. Once contracted the illness is usually mild with symptoms lasting from several days to a week. The most common symptoms of Zika virus are disease are a fever, rash, joint pain, and conjunctivitis.

Dr. Margaret Chan, director general of the World Health Organization (WHO) said, “A causal link between Zika infection in pregnancy and microcephaly has not, and I must emphasize, has not been established.” Dr. Patricia Pestana Garcez, a neurodevelopment expert who studies microcephaly at the Federal University of Rio de Janeiro in Brazil also affirmed, “There is no direct evidence that the virus causes microcephaly.”

The Japan Times says, “Many experts and environmental activists alerted on how some agricultural chemicals — such as paraquat, which has been classified as “highly poisonous” by U.S. regulators — which have been banned or phased out in leading industrialized nations, continue being extensively used in many developing countries, notable Brazil. They are particularly used in Brazil’s northeast, where almost a third of the microcephaly cases have occurred so far. In the last few years, Brazil has become one of the top exporters of orange juice, sugar, coffee, beef, poultry and soybeans. Brazil’s huge production of those items is probably due, in part, to the extensive use of pesticides, many of them highly toxic to humans.”

A report from the Argentine doctors’ organization, Physicians in the Crop-Sprayed Towns, also challenges the theory that the Zika virus epidemic in Brazil is the cause of the increase in the birth defect microcephaly among newborns. Instead of feeding into the standard virus mania this organization is pointing out that in the area where most sick people live, a chemical larvicide that produces malformations in mosquitoes was introduced into the drinking water supply in 2014. This poison, Pyriproxyfen, is used in a State-controlled program aimed at eradicating disease-carrying mosquitoes.

Zika virus outbreak currently gripping the Americas could have been sparked by the release of genetically modified mosquitoes in 2012," reports The Mirror. "The insects were engineered by biotechnology experts to combat the spread of dengue fever and other diseases and released into the general population of Brazil in 2012... The Aedes aegypti mosquito sub-species that carries both the Zika virus and dengue was the type targeted with genetically modified mosquitoes."

Interestingly, pregnant women of Brazil were required to get a new vaccine—DTwP (the whole-cell pertussis vaccine). Perhaps there is a problem with this new vaccine and or its toxicity is mixing with other factors. Pregnant Brazilian women were also encouraged to receive the MMR vaccine. Are the DTwP and MMR safe to give during pregnancy? Nobody knows as there have been no randomized studies on whether these vaccines are safe or effective for pregnant women.

To confirm the suspicion that vaccine damages might be lying at the heart of this crisis we have dire reports from mainstream media in Rio de Janeiro stating that one hospital alone in Niterói has attended 16 patients, with the syndrome associated with Zika, have Guillain-Barré, a common paralysis associated with vaccine damages.

A doctor in Recife is telling everyone that there is a connection between microcephaly and the Zika virus and this caused a stampede of panic. However, other doctors in Brazil and authorities in other countries are taking the relationship between Zika virus and microcephaly with great caution. Dr. Plínio Bezerra dos Santos Filho in Brazil warns that the cause of the brain damage could be problems with vaccines. He points out the possibility that dated vaccines where used.

The president of Colombia, Juan Manuel Santos, said on Saturday that there is no evidence that the Zika virus has caused any cases of microcephaly in the country, despite 3177 pregnant women were diagnosed with the virus. Santos also said that probably more than 25,600 Colombians were infected, with three confirmed dead so far.

Of course, no one mentions that fact that most if not all of these women are nutritionally compromised. The incredibly severe nutritional deficiencies in Brazilian population are easy to see because everyone eats white rice, white sugar, white bread, white pasta and white salt, all of which are stripped of magnesium, which is an essential mineral for pregnant women and their fetuses. White processed foods are poison for children and their mothers and are a leading cause of diabetes.

Magnesium controls calcium meaning calcium becomes toxic and accumulates in different tissues. The New England Journal of Medicinepresented one case saying, “Ultrasonography performed at 29 weeks of gestation revealed microcephaly with calcifications in the fetal brain and placenta. After the mother requested termination of the pregnancy, a fetal autopsy was performed. Microcephaly (an abnormally small brain) was observed, with almost complete agyria, hydrocephalus, and multifocal dystrophic calcifications in the cortex and subcortical white matter, with associated cortical displacement and mild focal inflammation.”


Edited by LH
Learn more about my recommended treatments »

Argentine and Brazilian doctors name larvicide as potential cause ...
www.gmwatch.org › news › latest-news
6 days ago - Zika Virus Outbreak in Brazil ... This poison, Pyriproxyfen, is used in a State- controlled programme ... Chemical, a Japanese "strategic partner" of Monsanto. ... The Argentine Physicians believe that the best defence against ...
BANG: Not Zika: Brazilian/Argentine doctors say: pesticides « Jon ...
WordPress.com › jonrappoport › bang-n...
6 days ago - A poison intentionally added to the water supply in 2014? Who cares? Means nothing. ... The manufacturer of the poison is a strategic partner of Monsanto? That couldn't be a clue.
Zika HOAX exposed by South American doctors: Brain ...
www.naturalnews.com › 052943_Zika_v...
4 days ago - A group of doctors from South America are now saying the ... the Brazilian state added pyriproxyfen to drinking water is not ... As reported by the Argentinian doctors in their report, Zika ...
Latin American Doctors Suggest Monsanto-Linked Larvicide Cause ...
ecowatch.com › 2016/02/12 › larvicide-c...
4 days ago - According to PCST, in 2014, the Brazilian Ministry of Health introduced pyriproxyfen to drinking-water ...
Doctors Expose Monsanto Linked Pesticide as Cause of Birth Defects
thefreethoughtproject.com › doctors-gro...
2 days ago - Zika Virus, Monsanto, microcephaly, pesticide, larvacide. ... doctors from Brazil and Argentina are directly challenging the ... the Brazilian state added pyriproxyfen to drinking water is .... You seriously believe Monsanto is legit?
Argentine and Brazilian doctors suspect mosquito insecticide as ...
The Ecologist › News › news_analysis
5 days ago - Might the 'cure' in fact be the poison? ... Water tank in Bahia state, northeast Brazil. ... has gone so far as to say that he has "100% certainty" that there is a link ... Sumitomo Chemical, a Japanese 'strategic partner' of Monsanto.
Report says Monsanto-linked pesticide is to blame for ...
www.sciencealert.com › argentinian-repo...
4 hours ago - Report says Monsanto-linked pesticide is to blame for ... and that this poison ( pyroproxifen) is applied by the State on drinking ... suggesting that pyriproxyfen in Brazilian drinking water ...
You must log in or register to reply here.
Share:
Facebook Twitter Reddit Pinterest Tumblr WhatsApp Email Link
Top