Derrick Jensen calls to blow up dams; the end game? We say 'No!' 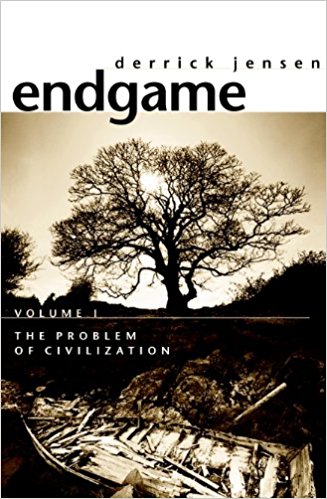 hi; I loved this book; had no children, but joe and jan have opened my eyes..i see the Problem now as not the PeoPle but a few very rich Powerful old families at the top telling us what to think..

derrick was hurt by his father and hates People and modern life and is calling on hackers to bring down the 1st world to the dark ages..

one day on tv news I saw that book in the self of a high white house staff.

there are lots of good People who believe like this duped by the big boys... LH


About the Author; never married no children
Activist, philosopher, teacher, and leading voice of uncompromising dissent, DERRICK JENSEN holds degrees in creative writing and mineral engineering physics. In 2008, he was named one of the Utne Reader’s "50 Visionaries Who Are Changing Your World," and in 2006 he was named Press Action’s Person of the Year for his work on the book Endgame. He lives in California.

Endgame, Volume 1: The Problem of Civilization Kindle Edition
by
Derrick Jensen (Author)
› Visit Amazon's Derrick Jensen Page
cut from above;
The long-awaited companion piece to Derrick Jensen's immensely popular and highly acclaimed works A Language Older Than Words and The Culture of Make Believe. Accepting the increasingly widespread belief that industrialized culture inevitably erodes the natural world, Endgame sets out to explore how this relationship impels us towards a revolutionary and as-yet undiscovered shift in strategy. Building on a series of simple but increasingly provocative premises, Jensen leaves us hoping for what may be inevitable: a return to agrarian communal life via the disintegration of civilization itself. 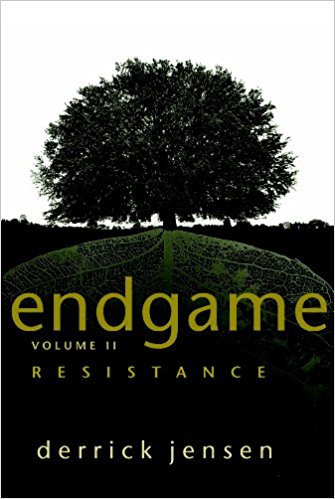 Endgame, Volume 2: Resistance Kindle Edition
by
Derrick Jensen (Author)
› Visit Amazon's Derrick Jensen Page
https://www.amazon.com/Endgame-2-Resistance-Derrick-Jensen-ebook/dp/B00541YJVG/ref=pd_sim_351_1?ie=UTF8&dpID=51ZISKC3f5L&dpSrc=sims&preST=_OU01_AC_UL160_SR107,160_&psc=1&refRID=4YW46VCGEVBSDWJAYF5E
cut from above;
Whereas Volume 1 of Endgame presents the problem of civilization, Volume 2 of this pivotal work illustrates our means of resistance. Incensed and hopeful, impassioned and lucid, Endgame leapfrogs the environmental movement's deadlock over our willingness to change our conduct, focusing instead on our ability to adapt to the impending ecological revolution.

cut from reviews on this book on amazon; of 5 starsFits Like a Gun in Your Hand By J.W.K on February 24, 2007
off as being genuine here. By this, I don't mean that he is purposefully deceiving the readers so much as himself. Along with all the interesting environmental science, psychology and poetry the book contains, the underlying current of rage and despair that makes his writing so profound reaches an all time high in Endgame - to the point where he calls upon the reader to "go on the offensive," imploring us to blow up dams, tear up concrete and knock down cell phone towers. Just "don't get sloppy," he advises. "Don't tell anyone who doesn't need to know. Don't get caught" (Dams: Part IV).

book 2 from amazon rewiews
5.0 out of 5 starsLandmark work of moral philosophy
By Scott Meredith on July 6, 2006
Format: Paperback Verified Purchase
This seems to be Jensen's ultimate manifesto. It is basically a declaration of war against agricultural and industrial civilization.

But Jensen's point is not only that ultimately humans will have to surrender all their jazzy tech toys (including indoor plumbing) due to inevitable general collapse of industrial civilization, but that we should be glad to surrender them, and we should do so as early as possible to prevent what bit of species extinction we still can. But even more important than any individual "personal lifestyle" type of remediation is to actively fight industrial civilization's more destructive artifacts with explosives.

What's really interesting and surprising about Jensen is his essential optimism! Yes, despite 2,000 pages or so of griping and groaning about how bad it all is, Jensen still seems to think that some small number of humans, living in just the right way (as originally exemplified by North American indigenous peoples) are compatible with the survival of the rest of the biosphere. But I do have to wonder whether humans in the long term are genetically programmed to destroy as much as they can whenever they get the chance. Or at least, some humans will have this tendency, and then the bad will drive out the good - as we have seen with the 500 year European domination of the planet. So I tend to think that long term, humans and the earth biosphere are incompatible. It is a deadend species, and as long as we are building castles in the air, and wishing on a star, I guess I'd throw in my lot more with the Voluntary Human Extinction crowd.

But Jensen would VEHEMENTLY disagree with the above paragraph, and say that any such talk of genetic programming is at best nothing but scientistic gooblygook serving the master power Matrix, and at worst just one more excuse to put off the work that is crying out to be done (blowing up Columbia river dams to restore naturally spawning salmon).

In any case, once you have read this or any other Jensen book, you'll be in the mental grip of his moral absolutism - forever. (Of course, in Jensen's view, you already are in its grip, as you need clean water, don't you?) I don't mean his moral absolutism is necessarily bad or good. I'm still pondering that question. Nor do I mean that you'll necessarily accept his unrelenting assertion that the triumvirate of naturally clean water, freely spawning salmon, and reciprocally sustained landbase trump all other conceivable human values. I mean it literally - in that Jensen poses a moral and practical absolute principle that is so starkly opposed to every other activity, relationship, possession, plan, "hope", or value in your "normal" human life as you conceive it within the existent Matrix of industrial civilization - the Culture of Empire - that you will be unable to mentally reconcile the two. If Jensen is right, your whole "live long and prosper" mindset - as conceived and instantiated within the current paradigm - is flat wrong and must be jettisoned.

Thus you'll need to either accept Jensenism (then prove it by blowing up a dam), or reject it (implicitly rejecting clean water and allying yourself with child rapists), or descend to the intellectual purgatory of pure 24 carat Doublethink - forever. None of your quasi-religious New Age blathering will cut any ice with this guy.

So this book is a carry vector that will infect you with the above mental virus, and once infected you'll never be free of it.

Staff member
I read Jensen's 'Endgame' and was troubled by it, because he appears to be right that all our kvetching on the Internet isn't getting much accomplished. But at least we have hope that our ideas will become more popular. Whereas Jensen's strategy would immediately alienate almost every possible supporter. I'm very glad that so few people take Jensen's strategy seriously.
L

Jerry Russell said:
I read Jensen's 'Endgame' and was troubled by it, because he appears to be right that all our kvetching on the Internet isn't getting much accomplished. But at least we have hope that our ideas will become more popular. Whereas Jensen's strategy would immediately alienate almost every possible supporter. I'm very glad that so few people take Jensen's strategy seriously.
Click to expand...

this what Jensen has been calling for his wet dream;