Bomb bomb bomb save the world??

Watch the moive the Transcendence
The big boys show theRe hand but pretend to not like what they will do.
So they do what the u n bomber does go figure
The joke is on us black humor??? O yes the are laughing at us.


INDUSTRIAL SOCIETY AND ITS FUTURE
He was a product of the big boys madness and he got mad..


What insights can we learn from him!?

Theodore John Kaczynski (/kəˈzɪnski/; born May 22, 1942), also known as the Unabomber, is an American mathematician, anarchist and domestic terrorist.[2][3][4] A mathematical prodigy, he abandoned an academic career in 1969 to pursue a primitive lifestyle, then between 1978 and 1995 killed 3 people, and injured 23 others, in a nationwide bombing campaign targeting those involved with modern technology. In conjunction, he issued a social critique opposing industrialization and advancing a nature-centered form of anarchism.[5] 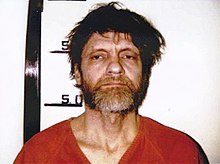 Kaczynski after his capture, 1996
Born Theodore John Kaczynski
May 22, 1942 (age 75)
Chicago, Illinois, U.S.
Other names The Unabomber
Education Harvard College (1958–62)
University of Michigan (1962–67)
Occupation Mathematician
Notable work Industrial Society and Its Future (1995)
Home town Evergreen Park, Illinois
Criminal penalty 8 consecutive life sentences without the possibility of parole
Criminal status Incarcerated at ADX Florence, #04475–046[1]
Conviction(s) 10 counts of transportation, mailing and use of bombs; 3 counts of murder
Details
Span of killings
1978–1995
Killed 3
Injured 23
Date apprehended
April 3, 1996
Raised in Evergreen Park, Illinois, Kaczynski was a child prodigy and entered Harvard College at the age of 16. He earned his BA from Harvard in 1962, then his MA and PhD in mathematics from the University of Michigan in 1964 and 1967, respectively. After receiving his doctorate at age 25, he became an assistant professor at the University of California, Berkeley, but resigned abruptly two years later. As an undergraduate at Harvard, Kaczynski was a research subject in an ethically questionable experiment conducted by psychology professor Henry Murray, which some analysts have claimed influenced Kaczynski's later actions.[6]

In 1971, Kaczynski moved to a remote cabin without electricity or running water in Lincoln, Montana, w

1. The Industrial Revolution and its consequences have been a disaster for the human race. They have greatly increased the life-expectancy of those of us who live in "advanced" countries, but they have destabilized society, have made life unfulfilling, have subjected human beings to indignities, have led to widespread psychological suffering (in the Third World to physical suffering as well) and have inflicted severe damage on the natural world. The continued development of technology will worsen the situation. It will certainly subject human beings to greater indignities and inflict greater damage on the natural world, it will probably lead to greater social disruption and psychological suffering, and it may lead to increased physical suffering even in "advanced" countries.

2. The industrial-technological system may survive or it may break down. If it survives, it MAY eventually achieve a low level of physical and psychological suffering, but only after passing through a long and very painful period of adjustment and only at the cost of permanently reducing human beings and many other living organisms to engineered products and mere cogs in the social machine. Furthermore, if the system survives, the consequences will be inevitable: There is no way of reforming or modifying the system so as to prevent it from depriving people of dignity and autonomy.

3. If the system breaks down the consequences will still be very painful. But the bigger the system grows the more disastrous the results of its breakdown will be, so if it is to break down it had best break down sooner rather than later.

4. We therefore advocate a revolution against the industrial system. This revolution may or may not make use of violence; it may be sudden or it may be a relatively gradual process spanning a few decades. We can't predict any of that. But we do outline in a very general way the measures that those who hate the industrial system should take in order to prepare the way for a revolution against that form of society. This is not to be a POLITICAL revolution. Its object will be to overthrow not governments but the economic and technological basis of the present society.

5. In this article we give attention to only some of the negative developments that have grown out of the industrial-technological system. Other such developments we mention only briefly or ignore altogether. This does not mean that we regard these other developments as unimportant. For practical reasons we have to confine our discussion to areas that have received insufficient public attention or in which we have something new to say. For example, since there are well-developed environmental and wilderness movements, we have written very little about environmental degradation or the destruction of wild nature, even though we consider these to be highly important.

THE PSYCHOLOGY OF MODERN LEFTISM

6. Almost everyone will agree that we live in a deeply troubled society. One of the most widespread manifestations of the craziness of our world is leftism, so a discussion of the psychology of leftism can serve as an introduction to the discussion of the problems of modern society in general.

7. But what is leftism? During the first half of the 20th century leftism could have been practically identified with socialism. Today the movement is fragmented and it is not clear who can properly be called a leftist. When we speak of leftists in this article we have in mind mainly socialists, collectivists, "politically correct" types, feminists, gay and disability activists, animal rights activists and the like. But not everyone who is associated with one of these movements is a leftist. What we are trying to get at in discussing leftism is not so much movement or an ideology as a psychological type, or rather a collection of related types. Thus, what we mean by "leftism" will emerge more clearly in the course of our discussion of leftist psychology. (Also, see paragraphs 227-230.)
Last edited: Jan 19, 2018
L

industrial society and its future - Nihilsentimentalgia
PDFhttps://nihilsentimentalgia09.files.wordpress.com › ...
For the first time in UK, we publish the Unabomber's manifesto in full, as well as Fe's April 1995 commWlique and introductions by Green. Anarchist and Autonomous Anarchists Anonymous. A pamphlet worth killing for?

French Professor Jean-Marie Apostolidès, briefly a penpal of the notorious Unabomber and a translator of his writings, these very questions are a scholar's terroir.

He was intrigued by the killer's anti-technology stance, and says that on that score, Theodore Kaczynski may have been right. "Technology transformed humanity into something different than it was before, into a new creation – flesh and technè," he said.

"We are mutants now. What will come out of it nobody knows. It's something unprecedented – and scary," he said. Science fiction, in many cases, is simply "presenting the fears of the metamorphosis."

Apostolidès recently published in book form a French translation of the Unabomber's manifesto, Industrial Society and Its Future. He is currently working on a philosophical and psychological study, Of Ink and Blood: The Writings of Theodore Kaczynski. The author of 1999's L'Affaire Unabomber also has written the recently published The Metamorphoses of Tintin: Or, Tintin for Adults. 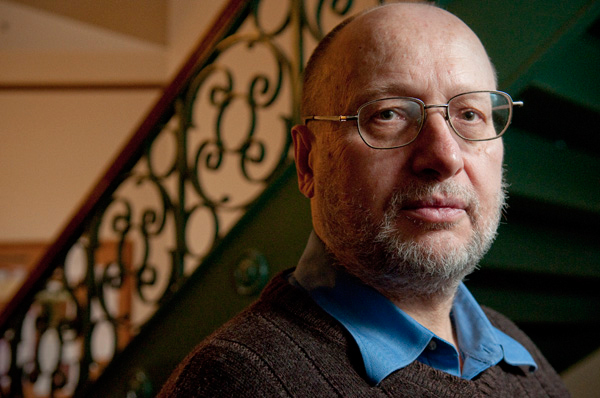 For Apostolidès, Kaczynski has been a 15-year interest. For most of us, the Unabomber is frozen in the image that gripped America on April 3, 1996: an unkempt, bearded recluse from the Montana wilderness, a man who by all appearances could have been a backwoods yokel or a hermit-saint, arrested following a 17-year spree of deadly bombings (many targeted at universities) that had earned him the tag "Unabomber."

Apostolidès, who has a background as a psychologist as well as a playwright and scholar of French classical literature and drama, was not surprised by the profile of the killer – a brilliant, Harvard-educated mathematician who had been a professor at the University of California-Berkeley.

Apostolidès had become intrigued with the Unabomber's screed, which critiques the pervasive effect of technology on our world and humanity's increasing dependence on it. He had already translated Kaczynski's "audacious" manifesto for the Parisian press a few weeks before the killer's arrest. (Kaczynski said he would halt the killings if his Industrial Society and Its Futurewas published; the Washington Post and the New York Times obliged in 1995.)

Despite some sympathy for Kaczynski's views on industrial society, Apostolidès embraces technology – "because I think there is no other way. It brings positive and negative things. They cannot be separated.

"Our global history as animals is to go beyond our animality in order to create something we don't know. It has been the case since the caveman," he said.

"There is a great leap leading God knows where," he said.

Inevitably, technology's takeover has its casualties. Kaczynski created them, and became one of them – a former professor now an inmate of a maximum-security prison. Kaczynski was haunted by the notion of the noble savage, a myth that has echoed through Western thought from Rousseau to today's blockbuster Avatar. The Unabomber, said Apostolidès, is a direct heir of the anarchists of the late 19th and early 20th centuries.

However, the way back to the wilderness is a fantasy: "There's no way we can return. No way to go back to the frontier man. Ted Kaczynski is a hundred years too late," he said.
L

So what to do? Joe atwill calls for new forms of schools of rebellion!! To save our selves family and friends