Staff member
My father, Billy Joe Russell, died on the evening of Dec. 31 after a two-week battle with Covid-19, and 6 weeks after his 90th birthday.

He always said that he had been blessed with an exceptionally happy life. He grew up in Texas during the Great Depression, but his family did OK. He was in school during World War II, at Neville High, Tulane University, and Louisiana Tech, where he finished a degree in engineering. During the Korean War, he served in the army signal corps, but never saw combat. He began working in the aerospace industry in 1953, working on analog and digital computers for missile guidance.

In 1955 he married my mother, Ruth Ellen Russell. They enjoyed a wonderful 65-year-long marriage. I popped out in 1956, and my sister Karen was born two years after that. During the 1960's, Bill worked on the Apollo project. He headed up a team of engineers responsible for systems electromagnetic compatibility in the Command Module capsule, which means he had a sort of oversight over every device in the spacecraft. This was very exciting for me, as a little kid, to have a father who was literally a rocket scientist.

My dad was also an artist in his spare time. He enjoyed both painting and sculpture. In retirement, he became fascinated with model ship building, and he was very active with the Ship Modelers Association.

I would say that my father was the most consistently happy and optimistic person that I've ever met. He could always find the silver lining in any situation. Which didn't make his passing any less tragic. His last year was spent essentially as a prisoner in the assisted living facility he chose in 2019. We expected that it would be like living in a resort hotel, but the coronavirus and California's response had other plans. He took it all in stride, and on his 90th birthday he told me he was looking forward to his 100th. And then in spite of all efforts to maintain quarantine, he caught the coronavirus.

My mother also tested positive for Covid-19, but she seems to be completely asymptomatic. My father came down with a fever on Friday, Dec. 18th. Their coronavirus test results came back on Wednesday the 23rd. I was able to convince their nurse practitioner to give a dose of Ivermectin, also on Wednesday. But by Thursday, my dad was in the emergency room. He had serious GI bleeding, which made it impossible to use the usual anticoagulants. There was no room for him in the ICU because of the crushing number of coronavirus cases in Southern California. But within those limitations, I'm convinced that the attending doctors and nurses made heroic efforts to save his life.

I guess I'm one of those left-brained guys, with a disconnect between my cortex and my emotions. Once again I find myself in shock, and unable really to comprehend what has happened.
Last edited: Jan 5, 2021

Staff member
Bill and Ruth Russell together at their home in Cerritos CA, approx. 2013... 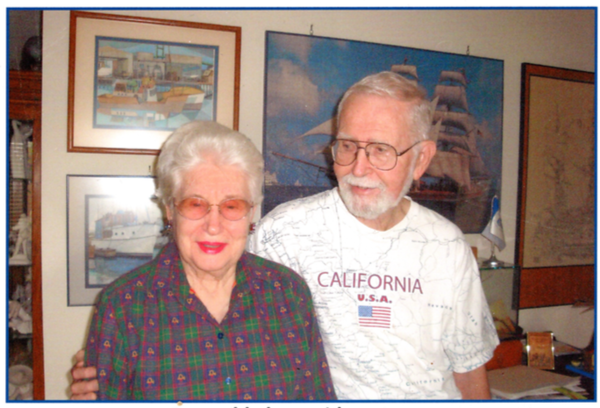 A cartoon portrait of the couple by a friend from the Ship Modeller's Association... 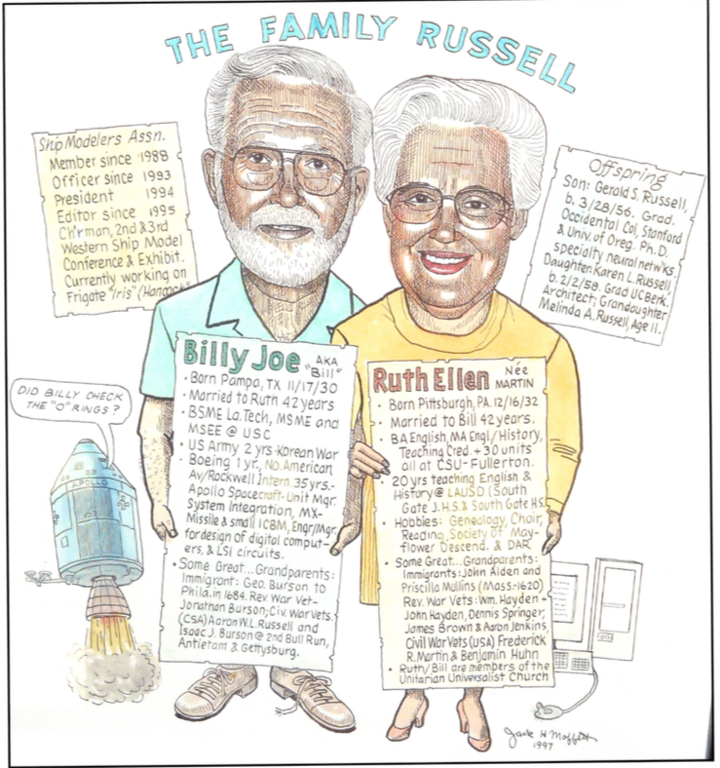 And here's an impressionistic self-portrait that really captures his high spirits and love for life. 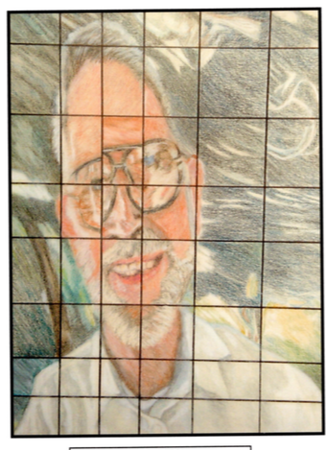 Hello again Jerry, I only just read this today. It was wonderful to read your glowing testimonial to your dad. It is obvious that the idyllic-sounding marriage and academic prowess were the perfect ingredients and nurturing environment to shape you into the extraordinary person you are.

I am so sorry that your father was taken like this. In such a tumultuous year there are countless similar stories, but the grief is not ameliorated by knowing how many others have succumbed, of course. There have been many deaths amongst my own circle of family, friends and acquaintances this past year, including of course Richard, and Lloyde England, and now after reading about him, I include your dad as an honorary acquaintance. He would have been a great person to know.