1917, John Dewey said; an attack from some other planet would unite the world!

John Dewey, FAA (/ˈduːi/; October 20, 1859 – June 1, 1952) was anAmerican philosopher, psychologist, Georgist, and educational reformerwhose ideas have been influential in education and social reform. Dewey is one of the primary figures associated with the philosophy of pragmatismand is considered one of the founders of functional psychology. A Review of General Psychology survey, published in 2002, ranked Dewey as the 93rd most cited psychologist of the 20th century.[2] A well-known public intellectual, he was also a major voice of progressive education andliberalism.[3][4] Although Dewey is known best for his publications about education, he also wrote about many other topics, including epistemology,metaphysics, aesthetics, art, logic, social theory, and ethics.


One of the first known documents promulgating the plan to engineer an artificial extraterrestrial threat to the earth was the Imperial Japanese Mission of 1917, a record of the reception throughout the United States of the special mission, headed by Viscount Ishii Kikujirō. Ishii was a Japanese diplomat and cabinet minister in Meiji, Taishō and early Shōwa period Japan. He served as Minister for Foreign Affairs of the Empire of Japan between 1915 and 1916. 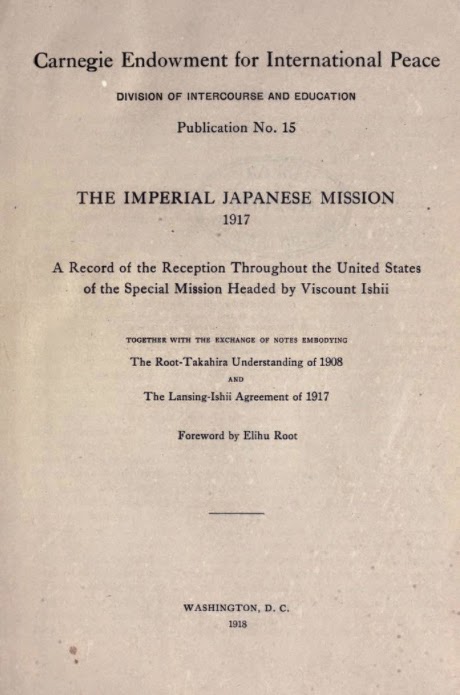 At a dinner for the Carnegie Endowment for International Peace in New York City in 1917, John Dewey said to the visiting Japanese Imperial Delegation headed by Viscount Ishii:"Someone remarked that the best way to unite all the nations on this globe would be an attack from some other planet. In the face of such an alien enemy, people would respond with a sense of their unity of interest and purpose."John Dewey was at that time the Professor of Philosophy at Columbia University, and is today known as the father of pragmatism and the shaper of our progressive education system. He was a futurist who studied and emulated the socialist works of Karl Marx and Friedrich Engels.

Dewey was also one of the original signers of the Humanist Manifesto, and he stated that in order to create the society they wanted to create, they had to eliminate the belief in God from the children, knowing that if this indoctrination was implemented among the children, within one or two generations, their fundamental transformation would be successful.

This hypothesis of uniting the nations in the face of an alien enemy was later put to the test for credibility with the CBS presentation of a radio drama by Orson Welles and the Mercury Theatre on October 30, 1938. And it proved that it would in fact work.

The American public believed it was real, thus setting the stage for the implementation of an alien threat scenario. The only problem was that the state of the art of technology at that time did not allow for a believable and credible presentation. It only worked in audio format, not visual. The development of saucer-shaped, wingless and tailless flying machines by the Germans during World War II solved that problem.

Robert H. Goddard, the Father of Rocketry, said to H.G. Wells on April 20, 1932:"There can be no thought of finishing, for aiming at the stars — both literally and figuratively — is the work of generations, but no matter how much progress one makes there is always the thrill of just beginning." 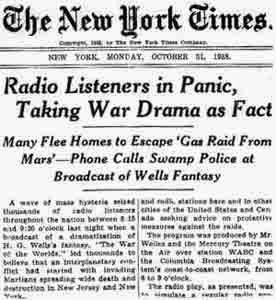 Shortly after that, H.G. Wells began work upon his book entitled The New World Order. His cousin, Orson Welles, tested the theorem that an invasion from some other species from some other planet could bring the world together under one global government, to end the sovereignty of nation states by dissolving national boundaries, doing away with wars forever.

The live test of the Hegelian principle of political conflict resolution inflicted upon the people was aptly called The War of the Worlds. Here is an audio broadcast of it in its entirety.

In 1947 near Roswell, New Mexico, a group of Army and Army Air Corps intelligence officers scattered debris over the desert and planted several shaved and surgically-altered chimps at the scene. Ever since then, blatant and incredible stories of unidentified phenomena, UFOs, alien abduction scenarios and extraterrestrial sightings proliferate the airwaves, television, and cinema, perpetuating the menace of the alien threat.

Dr. Hans Utter joins me for another update and to discuss my latest research discoveries at Princeton. We discuss the War of the Worlds broadcast on Oct. 30, 1938, as a psychological operation revealed in Princeton documents, that performed by Princeton University, with the support of CBS radio and the Rockefeller Foundation, with ties to the intelligence community.